We managed to have two club days since my last Hangar Talk – the first time for a while that the weather has been favourable and we could string two months in a row. May club day had 16 members attend and as reported previously, the weather was a bit windy but that did not deter most from having a go.

What a cracker of a day! A crisp morning but no cloud and no wind made for one of the best days in a long time. As a result, a pretty good turnout, although not as many as May’s club day; 12 in all. Good to see Fred Willis again who had been through some health problems but made the long journey from Swansea to catch up and get some “air time”. The good weather saw the following turn up – George & Kerry, David M, Russell W, Vince B, Mei-Lin, Fred W, Peter S, Danny N, Max W, Rodney K and Geoff H. Work commitments for some meant they couldn’t make it this month.

As usual, Geoff did the barbecue and this time he brought along some new burgers from Coles. They had cheese in them and were certainly more flavoursome than the previous versions and were a welcome change. Good on Geoff for trying something new!

As mentioned, it was a cracking day. No wind to speak of, a bright cloudless sky with enough warmth from the sun to make it quite pleasant on the flight line. Russell Walker was again trying out his aerial photography, not a drone this time but with a “GoPro” clone mounted on the top of his Piper Vagabond, resplendent with some markings that were missing when Max maidened it for him in December. Max Wiggins flew his electrified “Miss America” and it was easy to see with the colours and the build quality that it had come from the workshop of none other than Greg R. The Miss America was also fitted with ailerons, unlike the original design. David McGee brought along his Ugly Stik and decided to fly his foamie first to blow out the cobwebs and settle the nerves before he flew the Ugly Stik. No need to worry David, you managed it incident free! Mei-Lin continued her growth but struck the same dilemma many face when first flying – She took off in a southerly direction into the wind. However once it came time to land the wind had shifted and that meant a landing approach from the north. She did a fine approach and looked well lined up for the runway and at a nice height for a perfect landing. Then off the model roared with an aborted landing.  “I like to land from the South”, she cried out from the flight line. No sympathy from Vince as Mei-Lin circled for another approach, this time from the south. Another nice landing from Mei-Lin but the nerves took their toll.

Rodney Kreutzer didn’t make it for the May club day due to work commitments but arrived this month with a couple of large scale models from his WWII squadron; This time the P-47d “Razorback” along with the Focke-Wulf Fw-190 he brought along in April. Again both ARF’s and up to the same standard as all of Rodney’s models. The P47 and details are below –

Peter Daniel and Doc Baldock have again kept the material coming, this time an Extra that Peter D has built for Peter Armstrong. This one was maidened in February but I’ve only just got around to writing about it. Peter had this to say.

Hey there George,
Hope you and Kerry are well.
It’s been a while since we communicated.
I have been very busy with another project, but rolled it out yesterday.
38% Extra 330 L.
105″ wingspan. Turnigy 80cc electric for power swinging a 26″ prop.
It was built for Peter Armstrong, my next door neighbour and we will test fly it in the next few weeks when we have favourable weather.
I have attached a few pics of construction and the finished model.
Will send some in air photos after she maidens.
Regards
Peter Daniel

We welcomed a new member this month; Mark Holman. Mark has enjoyed many years as a motorcycle enthusiast, including racing them at Symmons Plains. Mark has decided that it might be time to hang up his racing leathers and find a more sedate hobby. Thankfully he chose aeromodelling and also chose our club. Max Wiggins, is one of those instructors who is prepared to step in and give a new member a bit of a helping hand and he demonstrated this by taking Mark on his maiden flight lesson on June 15. Mark took some sage advice and opted for an E-Flite Apprentice (details here). Max reported this after the flights –

“Hi George,
He went well the stabilisation system is great. I think takeoffs and landings won’t be hard for him as he looks like being a natural flyer.
Regards,
Max “

Sounds like it won’t be long before Mark gets his “wings”. The Apprentice has some inbuilt technology for the new pilot too. It’s called SAFE (Sensor Assisted Flight Envelope) and includes a “panic” button, if things get a bit awry. Here are the specs and photo of Mark with a smile (always good to see that after a flight!). 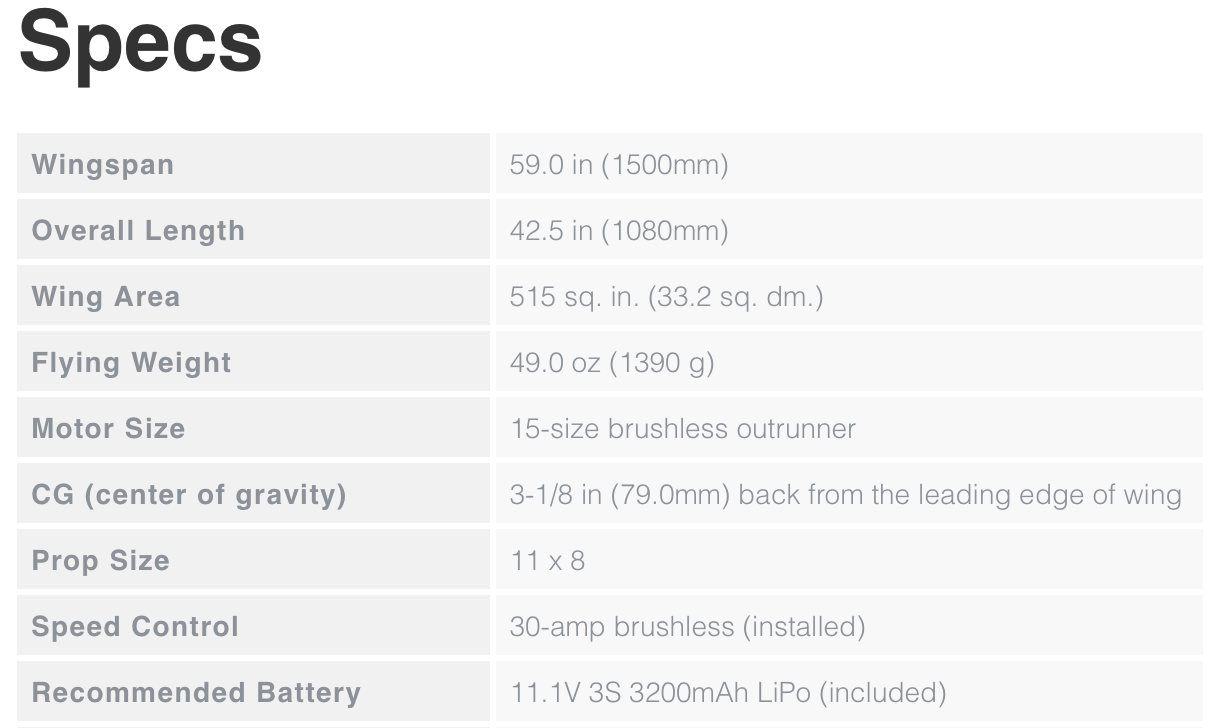 A late entry from Peter D showing us Doc’s latest creation – his own design electric glider, which has a whopping 15 foot (4.57m) wingspan. Peter as test pilot, filed this report –

Hey there George,
Just some photos of wednesday flying at our field. Probably not of any interest to anyone else but you though. (I’m sure everyone is interested Peter) Doc flew his newly completed 15 foot span glider of his own design yesterday . I will send you a few photos seperately She has an amazing glide, and I had to come down to about 4 feet height 250metres out to get it on the strip. Can give you some details if you wish.
Regards
P.D.

Hi George,
As I said, 15 foot span with Docs own airfoil design, who knows what it is. Doc sketched up the design on a sheet of A4 then scaled up the plans from that. Doc is responsible for the construction and I cleaned it up and did the covering. Peter Armstrong did the electronics set up on the Taranis with the ailerons and flaps being able to be used as crow braking and also the flaps being pulled in to act with the ailerons as well. She is powered by a Turnigy XP 35-48 1100kv motor with 60 amp Plush ESC with 2 × 4000mha in parallel 4 cell batteries turning a 12 x 6 prop producing more power than needed. Doc has named the model Godzilla. It has a magnificent glide and I as test pilot had to have two attempts to get it on the strip , she needs to be down to about 6 to 8 feet altitude about 250 metres out on a windless day. Weight comes in at 4.5 kgs.

P.S. we are going to replace the motor with a Propdrive 50-50 580KV, swinging a 16 x 6 prop not due to lack of power with the XP but simply because Doc has plenty of 5 cell 5000mha batteries and doesn’t want to buy more 4 cell stuff.

All in all another sucess from the Baldock workshop where he is rapidly running out of hanger space. 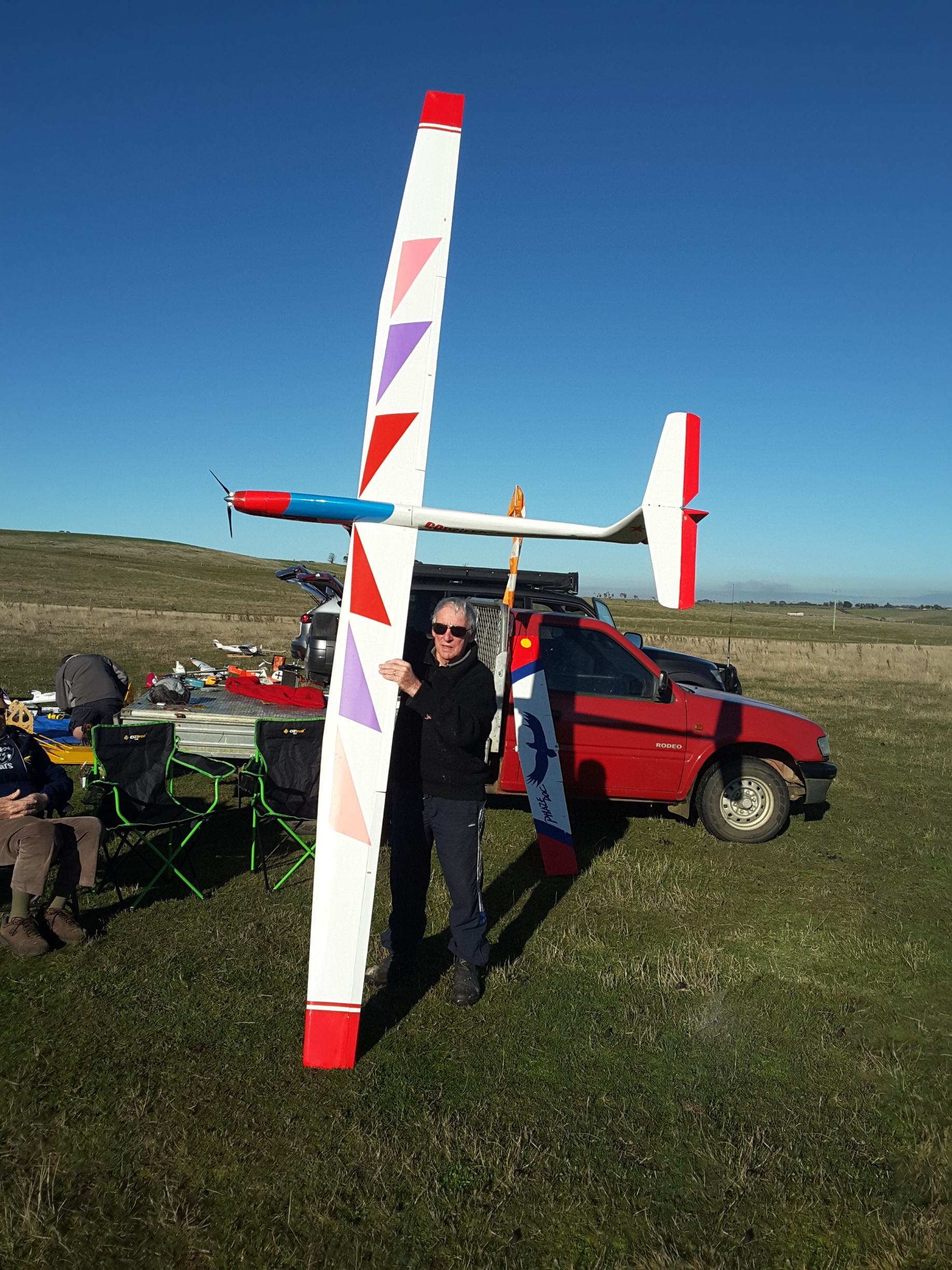 For the next Hangar Talk, I downloaded a lot of images from Greg Robertson’s camera so I should get a lot of material for publication!