The Launceston Model Aero Club is located on the Symmons Plains property (courtesy of the owner Stephen Creese) approximately 30 kms south of Launceston (Map). Club contests are held regularly with state events when available. Saturday and Sunday mornings are the main meeting times at Symmons Plains airstrip. Club day is on the first Saturday in the month. Visitors are most welcome. LMAC has excellent facilities for its members, including a comfortable clubhouse and outdoor barbecue area. Our strip is approximately 150m x 30m (450ft x 90ft). The club caters for all types of fixed wing radio controlled models, from thermal and electric gliders to large IC scale models. Should you have an interest in joining our club, feel free to make an application for membership.

LMAC is also one of the oldest model aircraft clubs in Tasmania. Established in 1945 just after World War 2 ended. To help us understand the efforts of the pioneers of our club (and aeromodelling in general), Dave Jacobs, one of the founding members and still going strong as a member, recalls this story; 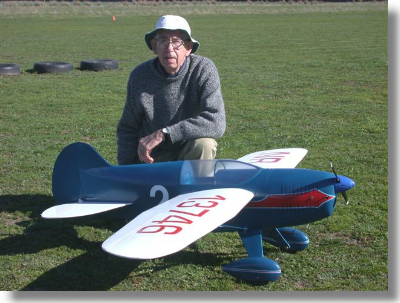 Some have been curious as to the early activities of the LMAC so I have put pen to paper covering some of the happenings of years gone by.

My recollections are as follows –

Just after the end of World War 2, Fred Stephens started the club. In 1945 Fred placed and advertisement in the window of the Birchalls store, with the kind permission of Mr Parnell. The advertisement read, “Anybody interested in forming a model airplane club please meet at the YMCA hall”. On the said night, 4 people turned up at the YMCA; Fred Stephens, Max Morrow, Dave Jacobs and a chap named Cannon whose first name I cannot recall.

Shown below is a photo published in “The Examiner” in 1946. 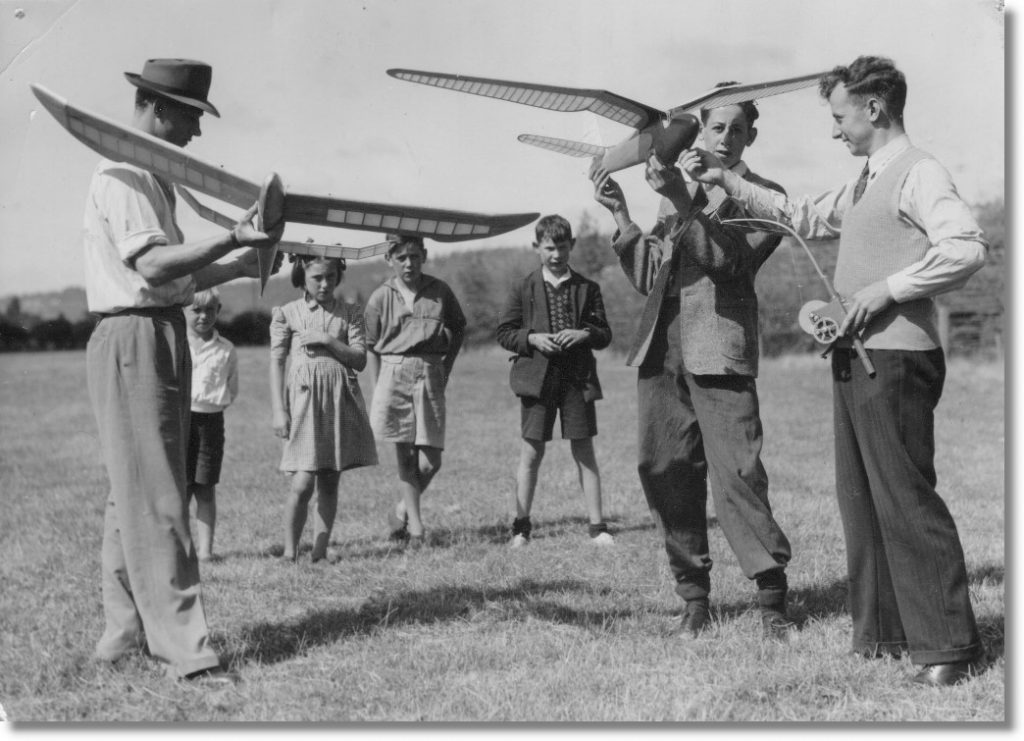 From the left Fred Stevens, the founder of the Club, Dave Jacobs holding Ken de Bomford’s sailplane at Ogilvie Park. Note the homemade winch, high geared and very effective. The model was flown at the Launceston Show, a risky activity! It flew perfectly after a good tow and eventually landed on the trotting track in front of the grandstand, yes it really happened; no radio control either.

One of the fliers mentioned, Ken de Bomford, lived at Beaconsfield. Now Beaconsfield, for those not familiar with the area, is some 43 kms north of Launceston. The journey is very hilly and winding. This did not deter the likes of Ken. Ken would ride his pushbike from Beaconsfield to Ogilvie Park to take part in the activities!

Perhaps I should start and tell of the brilliant idea someone had at the weekly club meeting. It was suggested that we should inquire into the possibility of using a shearing shed at the Nile for accommodation for a weekend flying activity. The owner of the property agreed to us using the shed for the stated reason.

One of the more progressive members, “Baron” Cordell asked his employer for the use of a flat tray truck to transport the boys to the field. The law of the land required that the sides of the truck be a certain height for the transport of people.

This was quickly achieved by erecting a barrier around the sides of the vehicle and we were ready to go.

A most uncomfortable trip to the field where we were to experience the most squalid accommodation you could imagine.
The owner of the property was to arrive to check on our activities and we encouraged each other to be on our best behaviour lest we be requested to vacate the premises! It was fitting that we show him some of the models flying.

John Bell towed his 8ft space “Fillons Champion” sailplane for a successful flight which impressed the gentleman who after a little time departed with a look on his face indicating some concern for our mental well being.

The evenings were spent gathered around several candles and I remember someone producing a pack of cards to introduce a game of poker. The unfortunate loser was left shivering in his birthday suit much to the amusement of the group. Any modesty soon disappeared out the back door.

At the time John Bell was employed at the Tasmanian Aero Club and arranged for a Tiger Moth to land at the field and give the boys an opportunity to enjoy the thrill of flying.

I only found out a few weeks ago that it cost John a few weeks’ wages to pay for the use of the aircraft. We had the idea that the Aero Club provided the Tiger for our enjoyment free of charge. Poor John, he didn’t tell us he was out of pocket.

On other occasions, trips were made to the field using any transport that was available. Some would ride their pushbikes and at the time I had a Triumph Thunderbird motorcycle and sidecar. One of the chaps didn’t have any transport and was persuaded to get on the pillion seat as my wife was in the sidecar with the models.

By the time I engaged top gear I had a problem. My leather jacket was screwed around about 90 degrees to my torso and finger nails were biting into my abdomen. I don’t know how the poor bloke got back home. He was nowhere to be found when I was to return.

My wife was a good passenger and at times I was able to give her a smooth ride by giving the machine a lurch to get the sidecar wheel off the ground and carry it for some distance. When the wheel again met the ground the bump was such that I was forbidden to continue with this behaviour if I wanted to persevere with our marriage.

Merv Cameron was the most fearless passenger one could hope for. The nearer one got to the sound barrier the louder he would laugh.

The first time I saw Merv was at a field at White Hills. He had a small Free Flight model, a Cardinal I think, he had the motor going full chat while holding the model in the launch position over his head. Greg Waddle’s father Peter kept calling out, “let it go, let it go”. He was holding onto it as if his very life was in danger.

Also of interest was the first time I set eyes on Greg Robertson. He was a dapper little chap with a bow tie on in St John Street. After inquiring I found out that he was employed at the Metropol Hotel. You will have to ask him what his responsibility was. 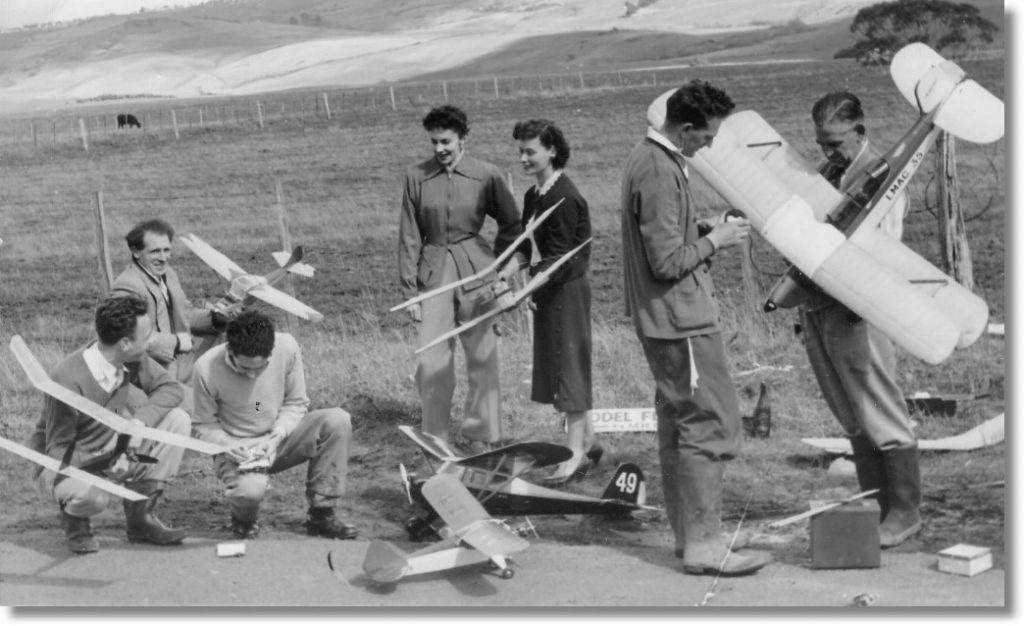 The other photo included is before a power-ratio competition at White Hills. From the left, Bill ten Brocke, the chap behind, Oliver “Ollie” Nielson, was killed shortly after when he fell off a military truck, then David Jacobs. The pretty ladies are Pat my wife, then Amy and Jack Atkins with Peter Waddle. Note the LMAC on the side of the fuselage of the biplane Peter Waddle is holding. (Photo taken by Merv Cameron)

You may notice the sign on the ground, which was fastened to the fence inviting people to come over to the field and watch the flying. Pete had made up a PA system and we were able to inform the many interested spectators of the form of competition and report the results of each flight.

After the event we were invited to Peters beautiful property down Everton Lane where we enjoyed his hospitality. He would make delicious Tuna sandwiches, which he called “chicken of the sea”.

Great times of fun and fellowship. Trust you find the notes of interest and perhaps write a few notes yourself without taking too many liberties at someone’s expense.