The weather again had us on tenterhooks – forecast was for winds of 7-12 km/h for Launceston Airport but up to 30km/h for Cressy! Friday night and things were not looking good. Wind was soon followed by rain as the night settled. Have we had more wind and rain than usual for this time of the year? My flight log suggests that if not then whatever wind was about has peaked most Saturdays! Anyway a couple of Friday evening calls to Tony Gray and again at 6:45am on Saturday and he and Will Deal were on their way from Hobart.

I have to report that the trip north was not without problems. At about 10am Saturday morning I received a call from Will Deal “Hi George, Tony and I are at Campbell Town with car battery problems. We will be there but a bit late arriving”. No problems I thought, Tony can build engines from scratch a car battery won’t stop him!” At about 10:45am we see Tony and Will heading up the road towards the clubhouse. I thought “As expected, Tony got things under way quickly”. As they pulled up alongside me at the pits Will advised me that Tony “the world’s (okay maybe an exaggeration) let’s say Tasmania’s greatest mechanic, didn’t fix it himself, did he call the RACT? No not our Tony – he called the SES!! Nevertheless, we’re glad he arrived and happy he took whatever measures to join us. That’s commitment for you.

The wind wasn’t ideal. At times blustery and often a westerly, coming straight across the strip! Not to be deterred everyone was prepared to have a go. We had 12 starters in the “Tomboy” class. To lessen the clutter in the sky, the starters were split into two groups of six. This was supposed to make recognition in the air easier – it didn’t seem to work. These models are small on the ground let alone hundreds of feet in the air! All are similar in design and colours are indistinguishable when they are at their highest.  The result? Well we had a couple of pilots flying the wrong model or just unable to find theirs in the sky. Fortunately there were a few “spotters” to locate the “missing” models! It pays to have some reflective or distinguishing marks on your model.

The wind meant a long walk for a lot of pilots because if for any reason you let the model get down wind, there was no hope of getting back to the strip. I finally sorted out my Tomboy. My first attempt used a Turnigy C2024 micro motor (26gms $US16) but it wasn’t up to the task. It may have just been a faulty motor but I was getting impatient and opted for the reliable but more expensive Hyperion. I get a very similar climb rate to the diesels (which is what I was aiming for) and I have the flexibility to use a 3s to give a quicker climb or to add weight to assist in penetration in windier conditions. For anyone interested, the gear I have fitted is as follows –

All up weight is 11.5ozs which, I am told, is the lightest around. In the main, I didn’t vary from the plan, including all formers in the build, except I also have one extra panel and reduced the dihedral (by 50%) on the wing. The next problem I had was a nice twist in the RH wing panel which made for a very eventful flight! I had tried to straighten it but the wing is very light and delicate and the twist soon returned. Being in a wheelchair I found it difficult to hold the wing and counter the twist whilst applying the heat gun. Greg Robertson told me all his wings were like bananas when first covered and his trick was to place one wing panel on the bench and hold it down with books. I used a heap of RC magazines and found they conformed to the rib shape, spreading the load evenly and held the wing easily whilst I “reversed” the twist and heated the covering. The result was a wing that has held true. As you would expect, the flight performance was a world of difference to the “warped” wing version.

Will Deal again controlled the Tomboy proceedings and as usual did another great job. Due to conditions, only two rounds per group were flown. Will made the following comments in his email.

As we flew only the two rounds I decided that the aggregate of both flights
would count for the day’s results.

However sheep station for the best time of the day to Merv C – 7.57

Will has prepared the score sheet as follows – 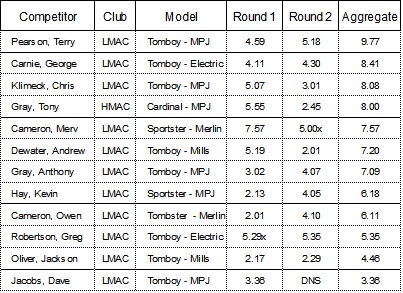 Dave Jacobs had an unfortunate fly away. As mentioned earlier, the little Tomboys were hard to distinguish from each other and Dave unfortunately lost sight of his and was just spotted heading for the ground at the south eastern pine trees, a few hundreds of metres away. Some damage unfortunately but knowing Dave it won’t be long before it is airborne again.

A few had departed by mid afternoon but those of us remaining had a couple of rounds of Old Timer. Greg R had left with his 10ft span Sportster (how many versions of these have you built Greg?) There was Tony Gray (HMAC) with his Lanzo Bomber, Kevin Hay with the Powerhouse, Chris Klimeck with his beautifully built scratch built “Little Ship” and yours truly with his Kavan Phoenix. The wind by this stage was gusting quite strongly. Tony Gray flew one round with his LB but decided discretion was the better part of valour as the large wing of the LB made it susceptible to damage from the gusty conditions, especially after landing. Chris K had a movie camera fitted to the Little Ship and we look forward to posting some videos from his flights. Much to my aide, Owen Cameron’s surprise, my electric Phoenix handled the wind quite well and in the first round I stayed up the longest with Kevin H second. The next round saw Kevin H blitz the competition with a very long glide time. Next time we might formalize the rules to include a Power Ratio event.

How many other club competitions in the country would you see competitors aged from 8 (Jackson Oliver) to 80 (Dave Jacobs)!! LMAC caters for almost all forms of fixed wing competition, more that any other club in the state I’d hazard a guess. We have Scale, Pattern, Thermal Glider, LEG (Limited Electric Glider), Tomboys and Old Timer just to mention a few. It’s also one off the few, if not the only club field you’ll see a turbine jet fly!