There has been a recent resurgence in the Vic Smeed designed “Tomboy”. This has mainly occurred due to activity promoted by Tony Gray. The “Tomboy” first appeared in the Aeromodeller magazine  in 1950. Whilst traditionally a free flighter, some are now building 3 channel RC models either IC or electric powered. Greg Robertson has been taking a few orders for either electric or IC versions. I’ve just started building my Tomboy also and it too will be electric powered. Although mine will be a slow build as putting together this new web site is taking up most of my time. As we all know, the rain has kept any flying opportunities to a minimum (read none). If anyone else is building a Tomboy and wants to tell us about it let me know via the Contacts page. Send a picture too and we’ll publish it.

Here is a picture of one Greg built however the keen eyed will see some variations from the Vic Smeed design. His latest models are now built to the original design. Greg’s model uses a Turnigy 2213-20 motor, 8×4 prop and a 850mAh 3S LiPo.

Another member who has a Tomboy is Kevin Hay. Kevin’s model, built by Merv Cameron, is true to plan. It sports a “Boddo” Mills 0.75 and is also radio controlled (2 CH). Here is Kevin holding his Tomboy. Can you spot the differences between the two variations? 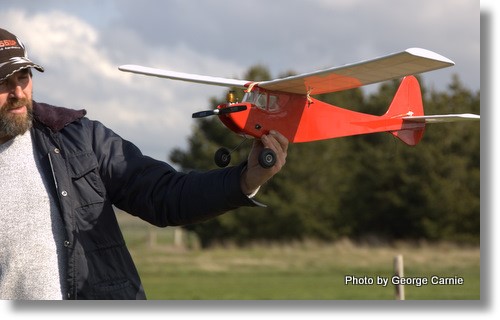