The sale of Symmons Plains and its impact on the tenure of our club has been the subject of speculation for some time. One member has seen fit to criticize the Committee for a perceived delay in informing members of what is happening. This criticism is unreasonable and in our opinion, shows a lack of consideration of the efforts of the committee, who, when all is said and done, are all volunteers. The “delay” is because any negotiations with the landowner must be handled with care and acknowledgement that we occupy the property through the good nature of the landowner and not through any “right” to be there. Accordingly the committee made a conscious decision to allow the new owners time to “settle in” before making any approach about LMAC’s tenure at Symmons Plains. When that approach was made, we had to ensure that negotiations emphasized the importance of the commercial nature of the property and our willingness to do what we could to ensure our continued presence at Symmons Plains. Importantly, any public release of information must meet the approval of the landowner. All this takes time. It may well prove fortuitous that the owner of Symmons Plains is Stephen Creese and Stephen is known to me from my previous employment as General Manager at Blue Ribbon Holdings Ltd.. In light of this prior relationship, the Committee felt it appropriate that I represent the club in the preliminary discussions as to the future of LMAC at Symmons Plains. Below is a synopsis of the meetings and telephone discussions I have had with Stephen and the farm manager Ron Davidson.

1. Both Stephen and his farm manager (Ron Davidson) are very keen for LMAC to remain at Symmons Plains. Ron would like to learn to fly himself.
2. The linear irrigator will be sold and all irrigation will be replaced with centre pivots spread all over the farm.
3. The hangar and all the pine trees to the East of the hangar will be removed to allow for a centre pivot irrigator. It will be located with its centre near the corner of the paddock adjacent to our machinery shed. It will have a radius of 470m that will reach the entrance where our sign is.
4. The southern bank of old pine trees will be removed also.
5. The main driveway will be redirected and take a right hand turn about halfway between the highway and the gate to the club house, eventually meeting the track that is at the far south of the paddock we fly from. This will be built in the coming summer.
6. The road in front of the clubhouse will disappear and the two paddocks will join up.
7. Work will start on some of the irrigators shortly. These will be available to Chilvers until his lease ends in March 2012.
8. They will run prime lambs (born on his north east properties) from March/April through the winter in non-irrigated pasture. They will be sold in spring.
9. They have no plans to run cattle on the property.
10. There will be no dairy. The reo is for the pads for their centre pivot irrigator.

HOW DOES THIS AFFECT LMAC?

11. Stephen has researched available areas on the farm. He has put some thought into where we could be accommodated which at least is encouraging.
12. Stephen has identified an area on the south western side of the southern bank of pine trees that are to be removed. This area will be a fenced paddock for running lambs as noted in point 8. He will be sowing new grass in this paddock and it will only be used for lambs. At a guess, the lamb paddock looks like about between 10-15ha (25-35acres). The current full size strip we operate from is about 10ha.
13. The external northern boundaries of the pivot circles will have Leylandii trees planted. They are fast growing hedge plants. My research says these can grow to 6m in 10 years. I have drawn the area in Google maps to give you an idea. 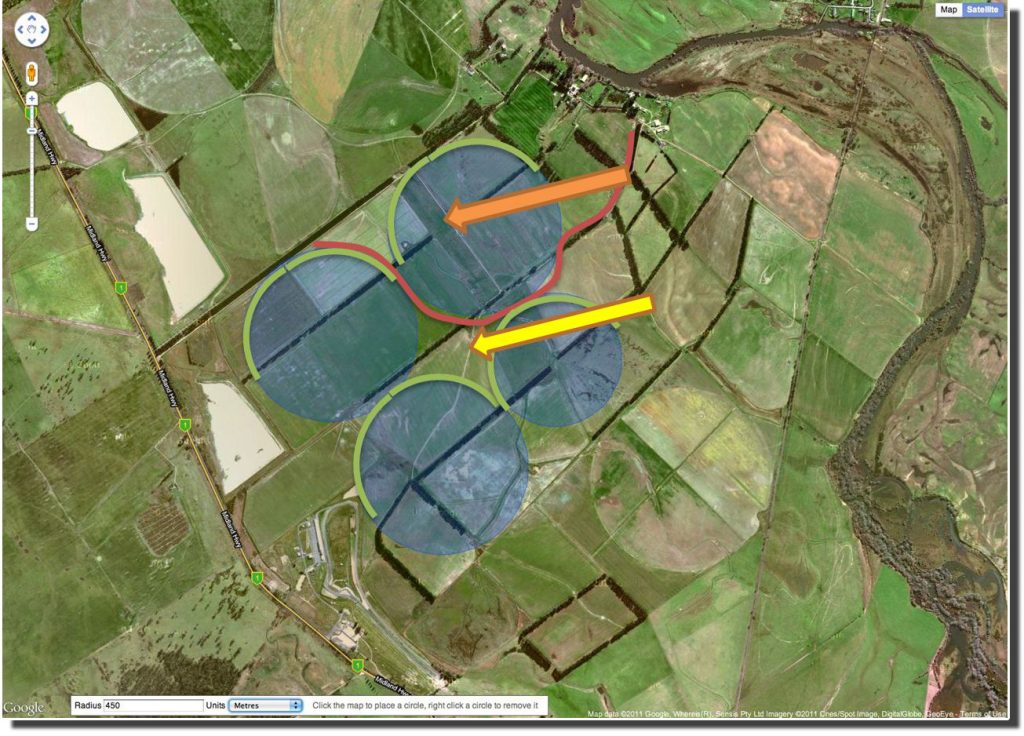 Tip: Click on magnifying glass to enlarge the picture.

14. The blue circles represent the CP irrigators. They are to scale. The orange arrow points approximately to where we are now. The yellow arrow is the intended lamb paddock and where we would be relocated. The green arches are approximate locations of the wind breaks. The red line represents the redirected road.
15. How the irrigators in adjacent paddocks and any associated wind breaks affect us remains to be seen.
16. He is happy to allow us to rebuild our clubhouse in the lamb paddock and to prepare, grade and if required, roll an area suitable for a runway. They will be constructing a road adjacent to where we could build our club house. We can fence the strip area if we wish.

Stephen has always been very amicable and has had a very supportive tone throughout the various discussions. I took the liberty of giving him a copy of the MAAA insurance renewal letter to make sure he was aware that we have adequate coverage in the unlikely event anything went wrong.
As a side note, Stephen has a 4yo and a 2yo son and he would like to be able to show them the models and the flying sometime in the future.