Whilst the weather threatened, the gods looked upon us favourably with light wind conditions and a pretty good roll up ensued. The strip is as green as we’ve ever seen at this time of year, courtesy of some regular irrigation. Whilst it looks great, the mower is getting more use and fortunately Merv Cameron was aware and made sure the strip and pits were mowed on Friday. Well done Merv.

Rather than a Scale Day it was more a Scale Aerobatics event as the emphasis was on manoeuvres rather than the models. The participants were all LMAC members with the exception of Phil Rayner from the NWAM. Phil defied the odds and his colleagues by taking the punt and driving through from Ulverstone with his wife Yvonne. Thanks to both of them for making the visit as it is always great to catch up. Another visitor, although not a participant in the event was Cliff Fiddes. He hails from the well known Peninsula Aeronautical Control Society (that’s a mouthful) which is based at Carrum Downs in Victoria. Cliff is a sales rep for Model Engines and brought with him a Phoenix Models “Genesis”. Cliff being at the cutting edge of RC, flies all electric (sorry Owen!). In addition he had a Samurai electric glider fitted with a FlyCam camera which he also flew – Cliff intends to email the video when he gets back to the North Island. He flew the Genesis (not yet released) and flew it expertly doing some very sharp aerobatics including a very very low pass that did not deviate off line all the way along the strip.

The models present on the day were –

John will provide details of the placegetters etc in his report.

LATE NEWS: John has advised he has a bit on and has supplied the placings which I have put at the end of this report.

The day was not uneventful with a few models having trouble taking off on the moist surface or due to undercarriage issues. Taking off was not the only issue – Landing on the strip was at times challenging mainly due to the “depth of perception” for pilots. Pilots lined up parallel to the strip but a few found themselves a few metres to the west and therefore off the strip and heading for a landing in the rough! Now the strip is not small at approximately 145m x 25m (475ft x 82ft) but it seems the natural desire to land the model well in front of yourself had a few pilots heading for the rough. Some also found reaching the strip a tad difficult! Kevin Hay had an unlucky start when his beautiful Sea Fury threw a spinner into the prop! The prop survived enough for Kevin to land. It was only then that Kevin realized what had happened! A replacement prop and Kevin was back in the air. Greg Robertson was the first to take to the skies with his nicely finished Seagull “Christen Eagle” ARF. Off down the runway only to see the nose bite the dust. Another go and she was in the air.

Doug Colbeck brought out his Cessna ARF and despite repeated attempts he could not get it into the air as the steerable nose wheel kept twisting and collapsing causing the model to do some spectacular acrobatics at the end of the runway! Shelve the Cessna and bring out the little Hobbyking C-47 foamie. It might have little wheels (little everything actually) but it took off quite easily. Finding the strip on the return was not so easy; landing outside the strip on a couple of flights but no damage was sustained – tough little model! Chris Klimeck had repaired the Stampe after the previous Scale event where we watched it nosedive after take off – radio failure was suspected. Chris was a little apprehensive as he had now installed the FrSky 2.4 gear in the Stampe and the Tx module in his radio. The first flight and a strange screeching sound emanated from the model shortly after takeoff. Worryingly, this was the same sound I heard when it nosedived in January! This didn’t do anything for Chris’ confidence! A number gathered around the Stampe as Chris tested servos, throws and anything he could think of to see where the sound was coming from. Servo stalling? Nope. Stripped servo gears maybe? No not that either. Along comes Kevin – spins the main wheels – nothing. Spins the tail-wheel –SCREEEECH…. was the sound – followed by laughter all around! A very relieved Chris K readied the model for another flight.

Thanks to the ladies for providing lunch. 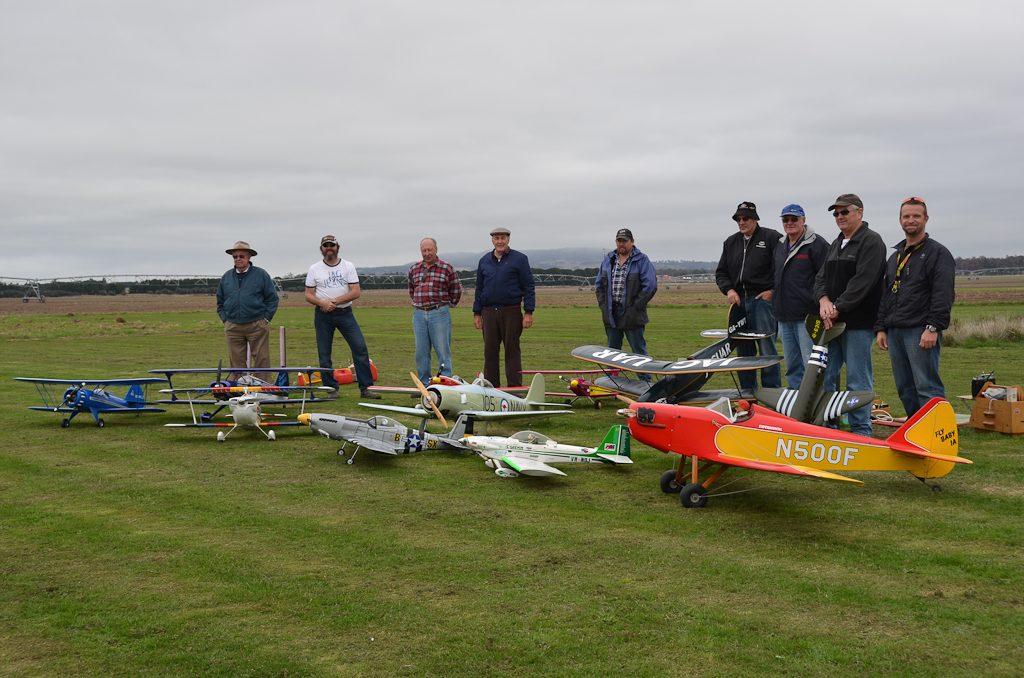 Competitors in the Scale event

After I left there was a little more drama with Andrew DeWater’s Mustang crashing on a dead stick landing approach. From the sound of it the model was banking on the base leg when it succumbed to the dreaded tip stall that this model is well known for. This is Andrew’s second Mustang – it might be time for a change in scale model Andrew?

More photos can be found here