Has Fred joined the electric brigade?

No he hasn’t but I couldn’t resist telling the stoy of our recent committee meeting. Fred has a long way to travel from Swansea to attend committee meetings and the drive home in the dark at night can be quite perilous, especially with all the wildlife making their way across the Lake Leake highway. After the October meeting, Fred commented on the fact his drive home was difficult due to his driving lights failing. Nothing unusual in that as these things happen. I sent this email to Fred the next day.

Hi Fred!, Kevin called to thank Kerry for supper as he left in a hurry to catch up with you. I said to him “you left without paying!”. He then mentioned that your driving lights were not working on the way home and it was a slow trip as a result.

We found out the reason today….
Our electric fence behind the car parking was in a sorry state with poles pulled out and cables snapped. I thought a wallaby had got caught in it and Wayne (our helper) said “it must have been the biggest kangaroo given the stretch marks on the gate handles!!”. CSI Perth (aka Kerry) identified the tyre tracks as coming from a Toyota Land Cruiser and the odour around the site had a distinct smell of “fish and chips”. This has since been confirmed by eyewitnesses. Your driving lights were shorting out on our electric fence you took home with you and is currently somewhere between Perth and Swansea. We had a real laugh! When you backed up the driveway you hooked on to the electric fence, and tried to abscond with it.
(Fred was most apologetic and offering compensation but the truth was there was very little damage and it took 10 minutes to repair. We actually got a great deal of laughter from the event!!)

After a long period of stagnation when it comes to competitions at Symonns Plains, Saturday October 20 was chosen as the first event of the year; a “Tomboy” and Old Timer day. The word was put around and a good roll up was promised, including a visit from our friends at HMAC. Unfortunately, someone forgot to tell the weather gods as the forecast proved to be correct. Windy and gusty!! We should have known spring is usually noted for some rain and plenty of wind.

To counter the cold weather Kerry decided to put on a L”MAC” muffin breakfast – English muffins, eggs from our free range chickens and bacon. These were sold out within minutes. Kerry was on the barbecue ably assisted by sous chef Merv Cameron who did the “plating up”. Great job Kerry and Merv!

Now any sensible thinking person would have said “Tomboy’s flying in winds gusting to near 30km/h – no way. Pack up and go home”. Ah but these Tomboy fliers are made of sterner stuff than that – plenty of gusto (pun intended) but maybe not much sense? The decision was made to start the competition. However, the customary preflight photo shoot was required. This was a good idea given the conditions and the potential for a high attrition rate. Here they all are ready and willing to give it a go. 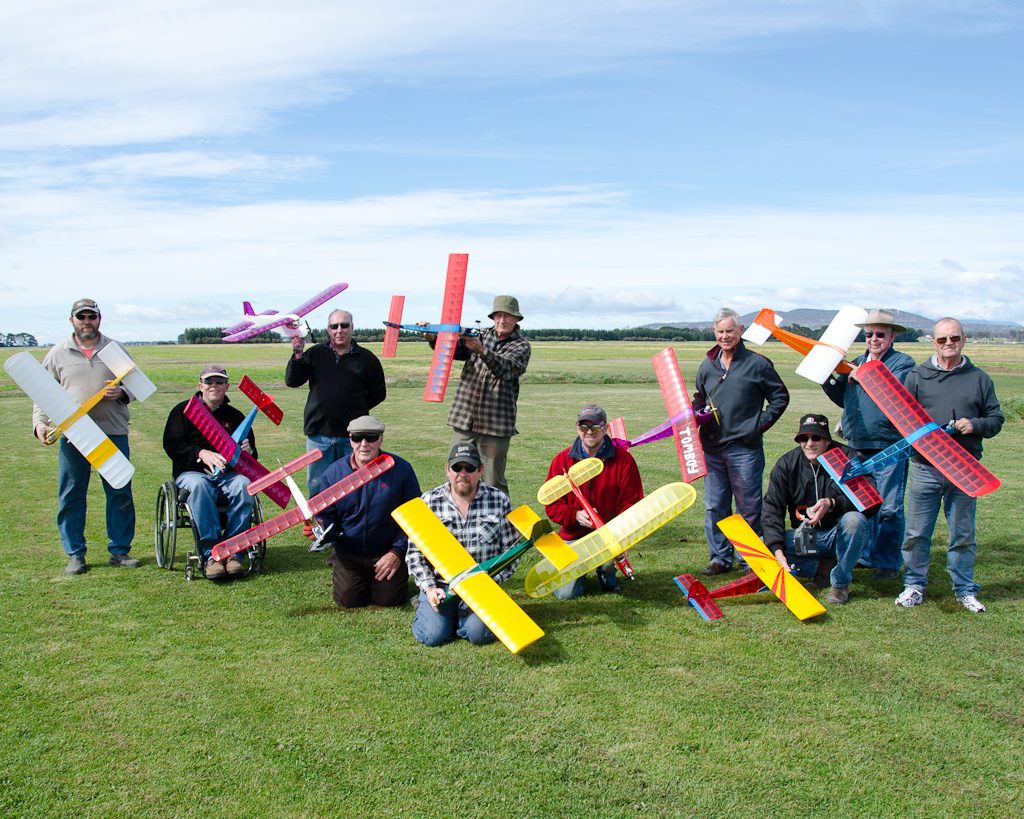 There were not as many smiles at the end.

Due to the number of entries, CD Will Deal decided to split it into two groups. The first group moved to the flight line grimly hanging onto their lightweight models trying to avoid them being blown away or having the wings fold in half. Caution had to be used to ensure their vice like grip on their model didn’t result in a crushed model but still they soldiered on and lined up on the flight line. Not only was it hard to keep the models in hand, the hats in place but also it was hard for some to stand up straight! The time had come, the countdown started and did I hear “Is everyone switched on?”. Next the mass launch to the north into the gusting wind takes place and those that were not quite ready were suddenly facing south and contending with some wayward models. 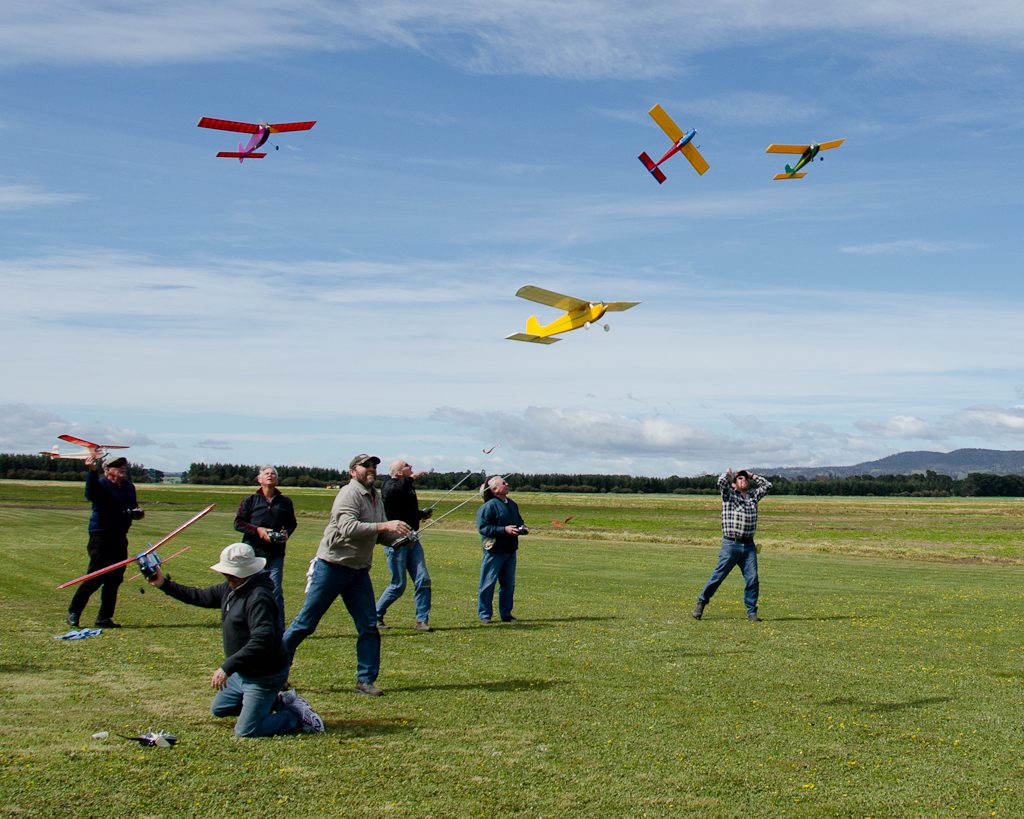 Owen C puts his hands on his head. Chris K loses his hat south and his model follows. Kevin H appears to have a good launch.

The next picture tells the real story…. 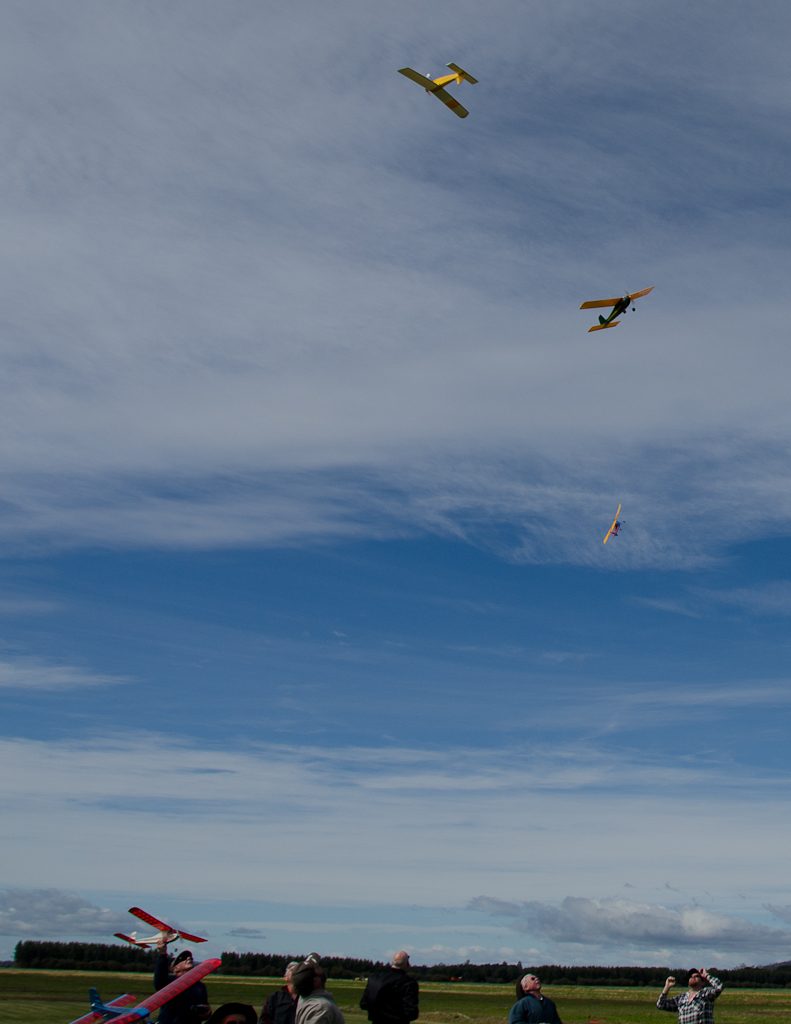 Chris is heading south, and Kevin’s model, after a good launch is inverted and going south!! Fred is saying “will I or won’t I launch?” Terry is yet to launch.

Back to the competition. Those that survived the launch and seemed to make some height were Terry Pearson and Tony Gray (HMAC). Terry had gained enormous height and was enjoying some great ridge lift. Tony was not far behind but had not gained as much height as Terry. Terry had a long flight and despite the strong conditions both he and Tony landed back on the strip.

Group 2’s turn next and there was even more trepidation given the casualties of the first group. Surely all would say ” too windy for me” but no not this group of stalwart (read foolish) pilots. Fred carried my model out (all 15oz) and offered some sage advice “Are you sure George?” “Yes Fred, why not.” I replied. “All care and no responsibility George” was Fred’s premonition response. 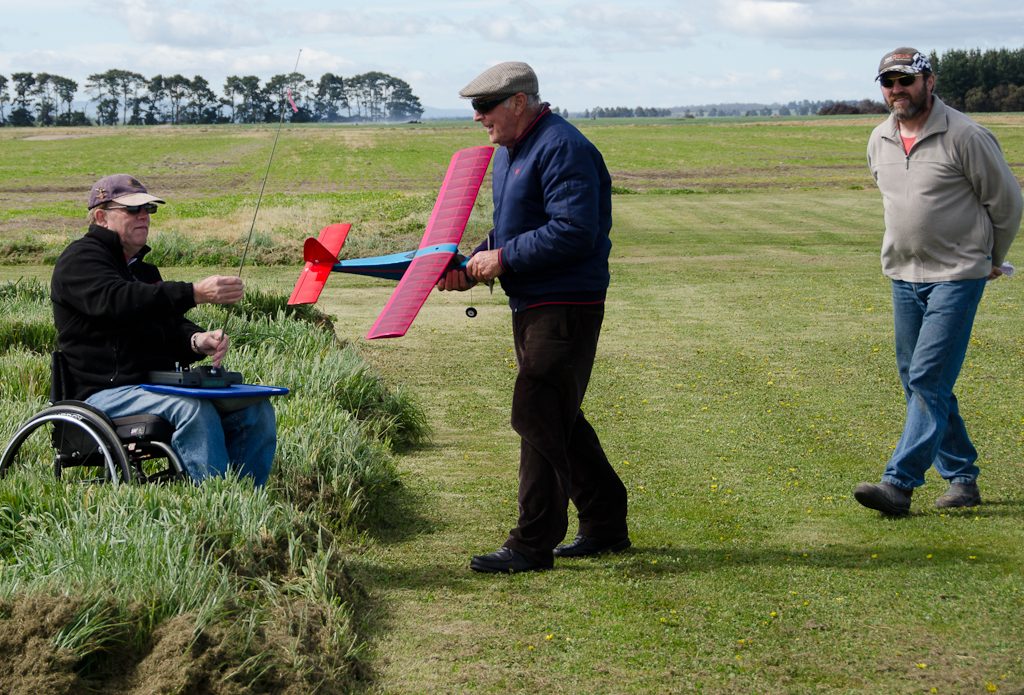 “Are you sure you want to fly in this George?” Fred asks. “I can’t be a piker now Fred” I replied as Kevin comes over to egg me on.

Another count down and another launch. I launched and having programmed in some throttle/elevator compensation after last week’s flight, this proved fatal as the model flew level and I thought I did not have enough UP elevator to counter the breeze and the flight was short lived. A later inspection revealed the RH wing panel may not have stood up to the rigours of the wind and (it is built very light) and was actually folding in flight (see picture). This may have been the result of an off strip landing at the last competition? 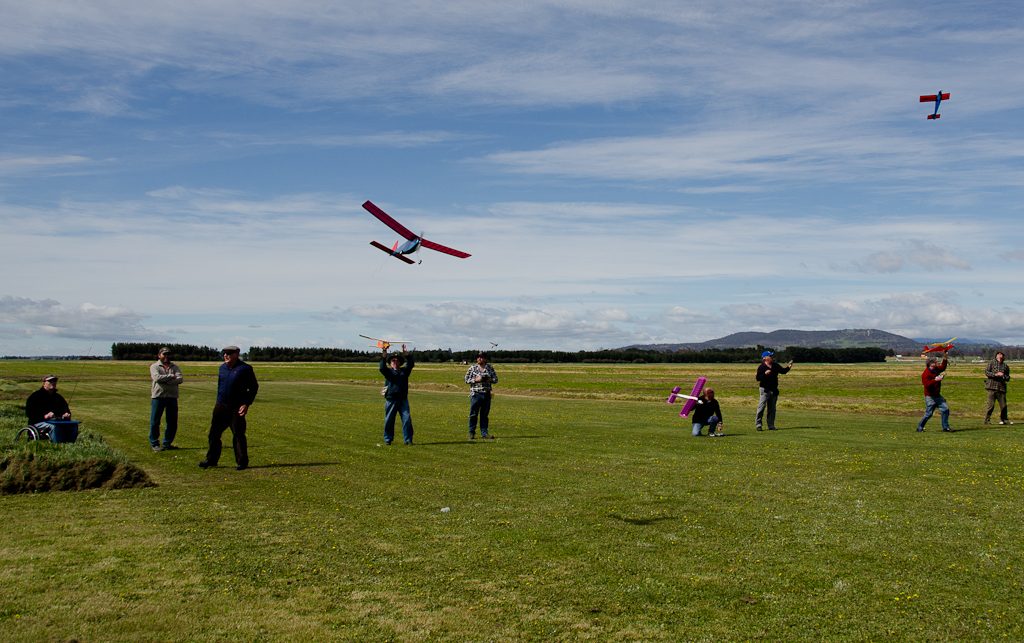 My model has a fairly flat launch and I detect a twist starting in the RH wing panel. Peter Allen’s model is vertical and about to start it’s wayward journey south.

Owen C’s model lurched off in the wrong direction and came to grief shortly after. Another model that caught every one’s eye was Peter Allen’s. It was going south at a rapid rate. “I didn’t switch on was the cry”. Oh no Peter, not again. The spotters were aplenty – “I can see it in the fluffy clouds south of the pine trees”. For those unfamiliar, that is about 800 metres away and west of the Symonns Plains raceway. A mere speck in the sky by now. Mike R from HMAC provided the transport and he and Peter set off on a now all too familiar journey. We’ve heard of “storm chasers” but we have “Tomboy chasers”! The consensus was that the model would be half way to Hobart by now. I think Peter’s “Tomboy” has some “homing pigeon” genes programmed in to it? Mike Rutledge had a good launch but was another casualty. Mike R and Peter A returned from their tracking with long faces “no sign of it…. we walked all the way to the railway line just north of the Feedlot!!”. Greg R was quick to join the conversation “What colour would you like the new model covered in? I’ll get started when you give me the word”. Peter looked at Greg with a stony face.

We now had the option of flying a second round and surely they would decline? Surprisingly this was not the case. Those that survived the earlier rounds were marshaling again. “Yes why not, it’s a bit of fun” said Terry P as they lined up again. Terry and Tony had this covered as again they did battle. Terry gaining similar height to his first round effort and again managing to harness the ridge lift present. This time only 4 of the 11 entrants either willing or able to participate with a number declining to risk their models. So Terry P, Tony Gray, Chris K and Kevin H had survived the first round and were ready to go again. The results were similar. First Terry P with 5:49 and second Tony Gray with 4:50. Third was Chris Klimeck with 2:40.

With a combined time of 11:14, Terry P was declared the winner followed by Tony Gray with 9:30. – Will we ever learn? Fortunately the Old Timer event didn’t get off the ground (literally).

The day concluded with the usual barbecue (thanks Kerry and also Faye and Alice for assisting). This was followed by a procession to view our new flying site where the slabs have been poured, and our area has been slashed. It currently sits in the middle of a wheat paddock. I’ll report with photos over the weekend (time permitting). Everyone I spoke to was very pleased with our relocation however we cannot underestimate the work that is still ahead of us.

Footnote: I received this message from Will Deal on Wednesday –

Hello George,
Although we had our usual stop and bull session at Campbell Town on the way home was a little restrained it was apparent that PA had seen the last of one of Greg’s early Tomboys.·However after searching Google maps for possible locations, Peter & Mike Rutledge decided to made the trip north on Monday to “have another look” Would you believe it – they found the model, undamaged sitting in a paddock!! Not sure exactly where but some distance past the tree line. So how about that.
Scores for the day attached – Terry and Tony thought the weather was just fine with Terry the champ for the day.
The nice group photo sure didn’t tell the true story!
We all had a good day as usual, the only one who has missed out is Greg – no new model for PA 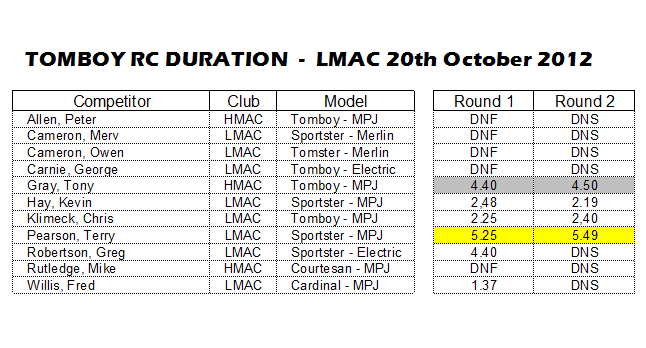 “Click” to enlarge.
The usual “thank you’s” to the ladies, sincere thanks from me as Treasurer for those that supported the canteen as it all goes towards our relocation. A special thanks to Will Deal for again CD’ing our event.
Just a reminder too that Kerry has again organised a monster Christmas Raffle – A food hamper, wine, cosmetics for the ladies, vouchers for the Sausage Shop, Petrach’s Book Shop, radio controlled boat, a radio controlled car and much more. Any donations will be welcomed (call Kerry). So far tickets are selling like hot cakes so get in quick. Want to buy some tickets or would like a book to sell some tickets to friends and family? Call Kerry 6398 2141 or 0418 134 672. Most of the Committee have tickets for sale so chase them up now. The more money we make, the more we can enhance our new facilities where you the member will benefit.
REMINDER: Book your attendance at the annual dinner here