We recently were donated three models by a local here in Perth, Rob Dale. Rob acquired these models in a partially built stage and decided he did not want them and offered them to LMAC as a donation so that we may sell them and keep any proceeds received.

There are two Spitfires and one trainer. The club may keep the trainer, finish fitting it out and use it as a “club trainer”. The Spitfires are offered for sale in an “as is where is” condition. They are now listed on the Buy, Sell and Swap” pages (see here). One of the ambitious modellers out there may be interested in one or both. If you can do something with them, why not put in an offer. All offers will be considered and best of all the proceeds will go to the club and we’ll make good use of the funds! We also have a OS FS120 Surpass II (circa 1990-1997). Rob says the motor has seized. My inspection showed the intake cam follower has seized and the exhaust pushrod has a slight bend in it. However the motor is not in going order. Buyers must accept a “as is where is” condition and there are no warranties on any of the goods. When the offers are in and it appears all bids have been exhausted, they will be sold to the highest bidder. 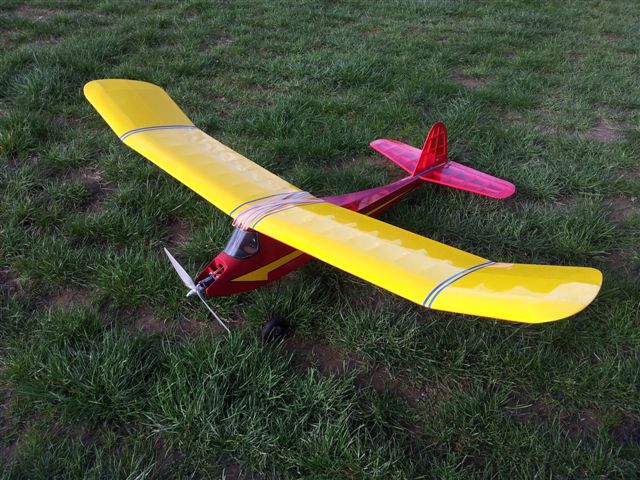 “I have just refurbished and converted this model to electric power and test flew it with success in windy conditions at LMAC today.

The original Buzzard Bombshell Old Timer Model was first flown in the USA in 1938 and it won several contests.

My Buzzard was built by Jacques Wakae about 16 years ago and I recently acquired it from John Blackberry.

It does nice lazy loops and slow rolls and will fly very slowly on minimal power. – Max”

This setup gives adequate power with a long flight motor run. I fitted the battery box up against the fire wall under the model so no lead was needed to balance the model. I have also shifted the servos forward by one bay to help with balancing. The Buzzard aerofoil has a very rearward C of G which helped me to balance the model without any lead in the nose. (See attached plan).

We are always looking for articles on your latest projects. It is as easy as what Max did; Just send me an email with a couple of photos, some information on the specs and I’ll do the rest. – George