(if you see any text in blue it is probably a link to a website etc.)

Following on from President Fred’s report where he was looking for Hangar Talk to return, I’ve finally found time to put “pen to paper” or more literally, the fingers to the keyboard!

The first thing I need to say is – it was great to be back and the camaraderie shown by all members has been well received by all. Lots of the usual light hearted humour interspersed with some friendly advice about flying techniques. It has been a while but now with the benefit of some improved health and a couple of visits to the field, I think I have enough material to make a start so here goes….

Another fine day saw a few members attend. I tried out my new 2.4g radio a FrSky Taranis and I was very happy with the feel. This radio provides telemetry feedback direct from the Rx either on the Tx screen or via voice which is fantastic. Such is technology these days. I’ll provide a separate report on this radio later. Merv C had his day cut short when the muffler parted from his model. Merv says “there’s $150 worth of muffler out there somewhere”. Terry had fixed the servo wheel on his Kryptonite only to find that today the tyre kept rolling off it’s rim! So back to the workshop for another fix. Phil Thompson (NWAM) and his wife Yvonne arrived for a visit. Phil brought along his P40 and it flew very well. It was the first visit from a NWAM member at our new site. Let’s hope we see you again soon Phil.

It was good to see Bill H getting some more “stick time”. Bill H and Terry tried out the $1.95 buddy cable so Bill should bring all his models home in one piece (for a while anyway Bill). When most had departed and only Terry, Bill and Mike remained, the big news of the day was Mike Hope gaining his Bronze Wings. Congratulations Mike!!

A reasonable turnout for what was a prefect day for flying. Autumn really is the pick. Sunny days, warmish, light winds are quite different to the scorchers that summer has provided in recent years.
In attendance were Greg and Alice, Merv, Bill and Faye, Mike H, Mick G, Terry P, Vince and Mei Lin, Richard C, Alan J, Max W, Dave J, Geoff H, John de G (nice to see you again John!) and George and Kerry.

It also seems that many members spent a bit of time preparing new models. There was Terry with his “Kryptonite”. The “Kryptonite” was a resplendent yellow colour (having read a few Superman comics in my youth I recalled Kryptonite was green!). This was a scratch built model and certainly reminded me of the pattern ships in the early 80’s, particularly those of Hanno Pretner and Wolfgang Matt who were the big players I recall from that era who adorned all the RC magazines at the time (which I still have).

Prop I’m using at the moment is a APC  13X9, turning about  10,500 RPM give or take a bit. The Model was Designed by Ian Bendle, an Aussie from Victoria, but I understand it was redesigned off one of Hanno’s Models called a Calypso.

Terry had a couple of flights and the model flew very well with little trim required. The number of flights was limited as when Terry was coming in to land he bumped the landing gear switch and did a “belly landing”. There was no apparent damage to the model with the large tuned pipe acting as a nice “skid pan”. However an observant bystander spotted the left aileron was way off centre. A few tests showed that all was not right and Terry wisely decided to take it home and survey the problem. Apparently the circular control horn had split at the spline during the belly landing.

Next was Greg with a Guillow’s Cessna 172 “Skyhawk” and a Top Flite DC-3. Greg must have done a bulk purchase, as both models were resplendent in silver Profilm. The Guillow’s Cessna kit was for rubber or free flight using a .049 cox (or equivalent). However with the advent of miniaturised electrics these days an electric RC conversion is an ideal alternative. Details are – 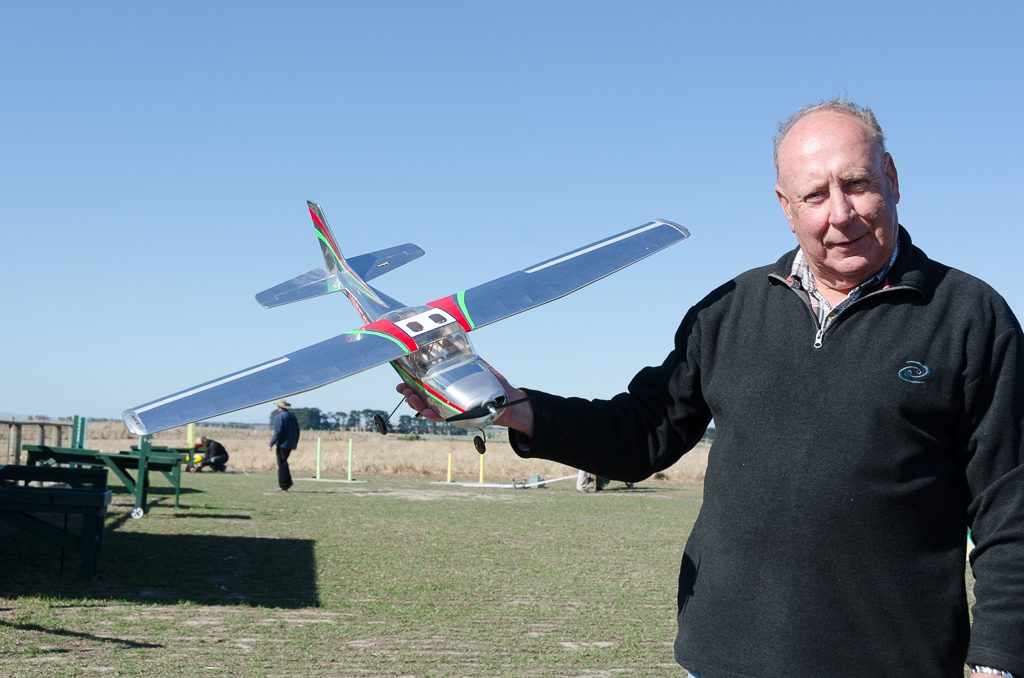 The little Cessna flew very nicely and was a great example of how many small kits, previously intended for free flight or rubber could be converted to RC using micro components. These micro components, once difficult and expensive to source, are readily available on sites such as Hobbyking.
So if you’re thinking of trying some kit building and don’t want to start too big, why not give a small kit a go? It might be a nice “little” winter project that you won’t need a big workshop to build it and you might be pleasantly surprised at the fun of kit building!

The TOP FLITE DOUGLAS DC-3 Twin-Engine 1/14 Sport Scale Airplane. The Golden Era of Aviation Eastern Air Lines replica has a fully sheeted fuselage and wingspan of 82.5″. The original airplane was designed for commercial passenger travel, and some still fly today.
The model was originally designed for two .20-.40 IC engines but Greg has fitted electrics, as you would expect. The model was not overpowered and suffered minor damage after a tip stall on take off. Greg would have repaired it the same day I suspect.
Due to cost, Greg did not include retracts at this stage. You’ll just have to crank out a few more models from that workshop Greg to pay for the retracts!

Another new model was that of Mick Green’s who brought out a Cermark “Graduate” ARF for it’s maiden flight. The model is fitted with an OS 46FX. Mick successfully maidened the model, had a couple of flights and looked happy as he packed it away for another day. 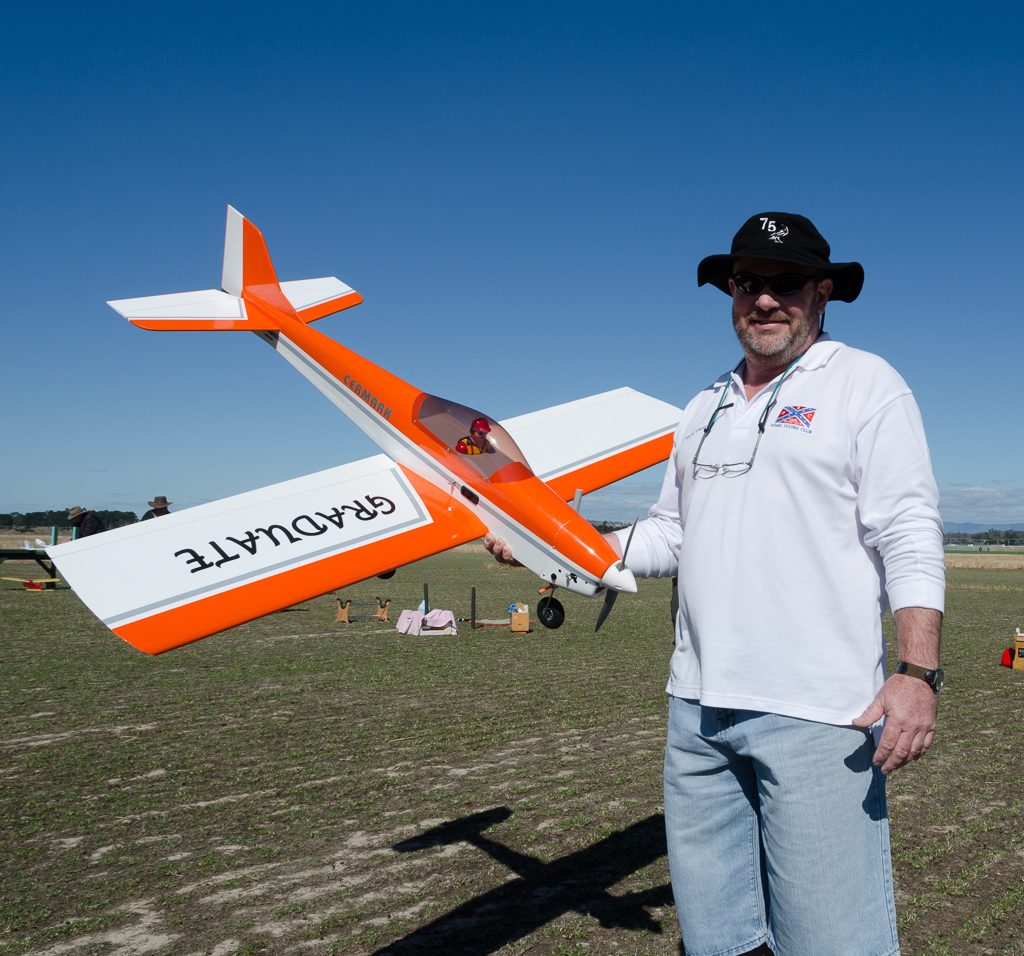 Mick G and his Cermark “Graduate”

There are rumours of another new model that has graced the skies above Symmons Plains but it appears it only comes out when others have left the site. We are trying to arrange some CCTV footage to see if the rumours are correct!

Vince Burling flew his “Katana” and again demonstrated some pretty fancy flying with some very low inverted passes. He tried a few more fancy aerobatics with his foamy 3D however the ground came up too quickly on one occasion! No doubt to fly like Vince can inevitably result in a few “scrapes” but it certainly keeps his reflexes pretty sharp. He also spent some time teaching Mei Lin with the Hobbyking “Trainstar” using the remarkable Assan “buddy box” wireless system. The club has been so impressed by this setup that we are about to invest in a similar system for any newcomers wishing to fly. This will complement the IC trainer nearing completion.

Two of Terry P’s charges are Mike Hope and Bill Hellinga. Mike seems to have a few models in his kit bag and is gaining in confidence so hopefully not too long before he gets those “wings” (Edit: read the April 19 post). Bill is still plugging away and is working on regaining confidence in his flying. Nothing beats “stick time” Bill.

As Fred has mentioned in his report, Kerry has returned to canteen duties and is ably supported by Alice and Faye. The fare included sandwiches, hamburgers, sausages and salads, followed by some cake for those not watching their waistlines! Thanks girls.

Some more images from the day  …

The first Club Day for 2014 was held on March 1 and it was great for everyone to catch up again and declare 2013 is past and the new year hopefully will bring plenty of new models and and some great developments at LMAC. I’ll try and bring some of the flying highlights and no doubt some mishaps but not too many of those we hope!

A nice turnout on what was a very good but hot day (hot for me anyway!). It was great to see an ex member in Nara Tatemsapya pay us a visit after many years away. Nara was welcomed by all and seemed to have a good time and demonstrated some nice flying skills. Mick G brought out a Pilatus Porter PC-6, respendent in Red Bull livery. It was a Flitework “Midi Pilatus” and details can be found here Andrew deW had his Scanner and was happily tearing up the skies.

Whilst all the chargers were doing their job, there were some questions over an apparent voltage drop on the charging station bus bar. This was passed on to Terry who has now reviewed this and could find no fault. However, Terry did make some adjustments to be sure. Next time we have a few chargers running and anyone observes a low voltage input on their charger and Terry is there, call him over and he will take a look.

Tanya P stepped into the breach and prepared a great bbq feast with salads and cakes. There was certainly no one that went home hungry!

Some more images from the day  …

I hope to get more emails this month with new building projects. Here is the first for the month. 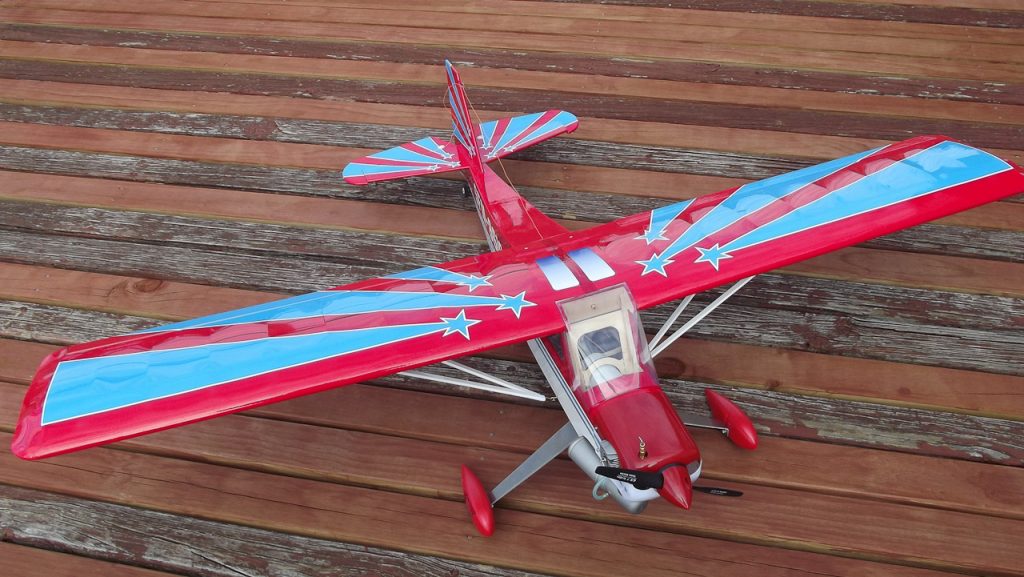