What a great get together this day was. It is a special day for LMAC because it is the only day of the year where we seem to be able to get many spouses and family members together.·

The lunch was more like a feast of great proportions! Gone was the normal club day BBQ fare and it was replaced with a Christmas lunch well worth the $12.50 paid. There was plenty to eat and many returned for seconds (and some for thirds!). The club is very grateful to Kerry, Faye, Alice, Gloria and Tanya in making this a lunch to remember.

We also had a visit from our friends from the Roaring Forties Aero Modellers, Tony and Elaine Gray and Will Deal. Unfortunately, due to other commitments, Mike Rutledge and Tony Shepherd were unable to attend. Mike is the president of RFAM and sent this email –

Hi George,
Unfortunately I will not be able to attend your Christmas function this year, I had held off replying in the hope that things may have panned out differently for me but alas it was not to be. Anyway there will be some representation from the south, I wish you a happy day and look forward to another chance to visit you in the near future.
Merry Christmas to you and all your club members.
Regards, Mike
Mike Rutledge
RFAM

The RFAM Christmas lunch was a terrific spread and Tony G offered up a light-hearted challenge to do better. From his repeated returns to the table for more, I think he was suitably impressed so we’ll call it a draw!

After the feast, president Fred, thanked everyone for their attendance and support of the club throughout the year and announced the time had come to draw the raffle. There were over 1000 tickets in the draw and Fred asked Kerry to do the draw. “No not me” said Kerry. “Come on Kerry, you’ve put it together so you can draw it”. “No thanks Fred” was the reply. “I insist” says Fred. A very reluctant Kerry stepped up, puts her hand in the bin, swirls the tickets all around and pulls one out. “Oh no!” utters Kerry. “George Carnie” was the cry. “Put it back and draw again”, I said. “Okay Kerry” go again said Fred. “No, someone else” says Kerry. Fred again insists. The hand goes in, swirls it all around and Kerry pulls out a new ticket….. “I don’t believe it – George Carnie, again!” Whilst we insisted a redraw, the consensus was that we won it twice so keep it. We’ll keep the perishables and donate back the other goods as a start to next year’s raffle.

Next was the draw for second prize, by this time Kerry was nowhere near the draw so it was up to Fred to draw and the winner was Mike Hope!

The raffle generated net income of almost $700 and the lunch over $300. A total of over $1000 that will be used wisely to further improve the facilities at LMAC for the benefit of our members. I personally know how much effort Kerry puts in to organise the raffle and source donations so a big thank you to you too.

It was particularly enjoyable this year to see those who have been members for many years but due to logistics, fly on a property close to their homes. I am of course talking about Peter Daniel and Steve “Doc” Baldock. His wife Jenny also accompanied Doc. Peter and Doc were always mid week flyers at Symmons Plains due to both having other social commitments on Saturday’s. However, they decided to forego their usual Saturday running and bowls to attend the Christmas lunch. Doc is a prolific scale builder and Peter is his designated “test pilot” and I am in the process of putting together a separate Hangar Talk on some of Doc’s creations. I think you’ll be amazed at what he builds from 3D drawings obtained from a book.

Our two juniors, Will & Henry brought along their foamie to fly but seemed to enjoy the company of Merv’s granddaughters more than the thought of flying! They even took to a bit of arm wrestling to impress the girls. Bad luck boys, the girls return home to Queensland after the Christmas break. 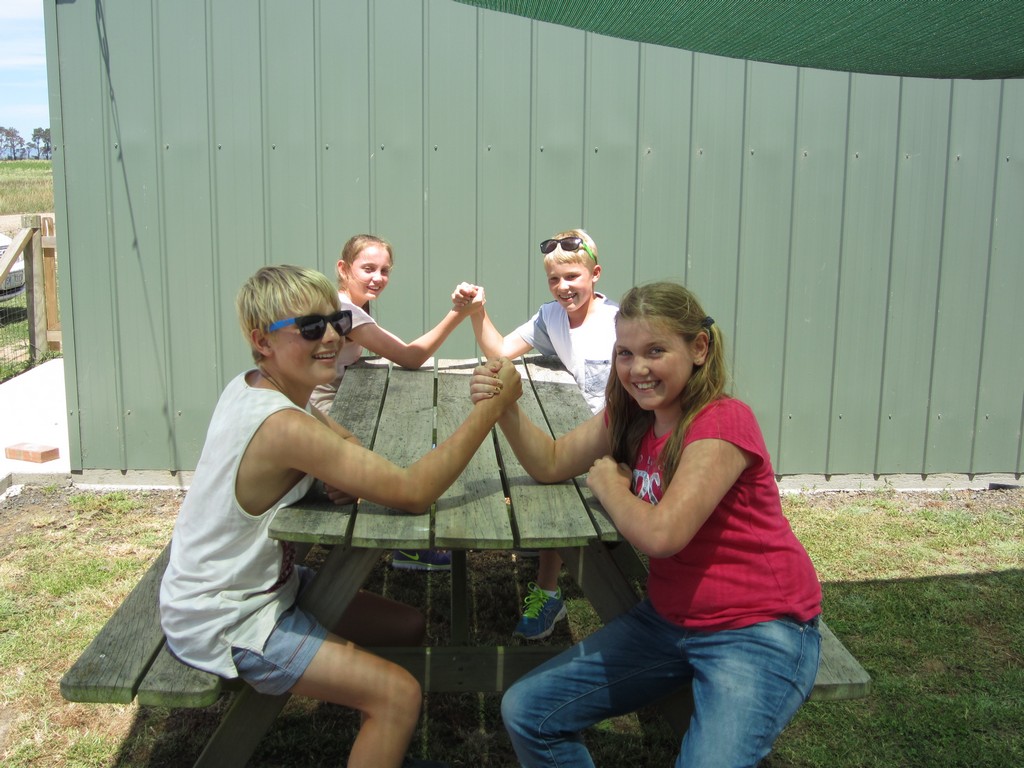 Whilst the day was billed as a “Fun Fly” day, most seemed happy to spend a lot of time chatting and catching up on what building projects were underway, there were quite a few that took the opportunity to put in a few flights. As usual, not everyone went home with their models in the same state they arrived in.

Greg R had some sort of failure and his beautiful Pilatus PC-9 had a rather nasty crash that had Greg in two minds as to whether he would bother repairing it. I’m sure when Greg gets home and has another look, we’ll see the PC-9 in the air again (after he finds out what the cause was). 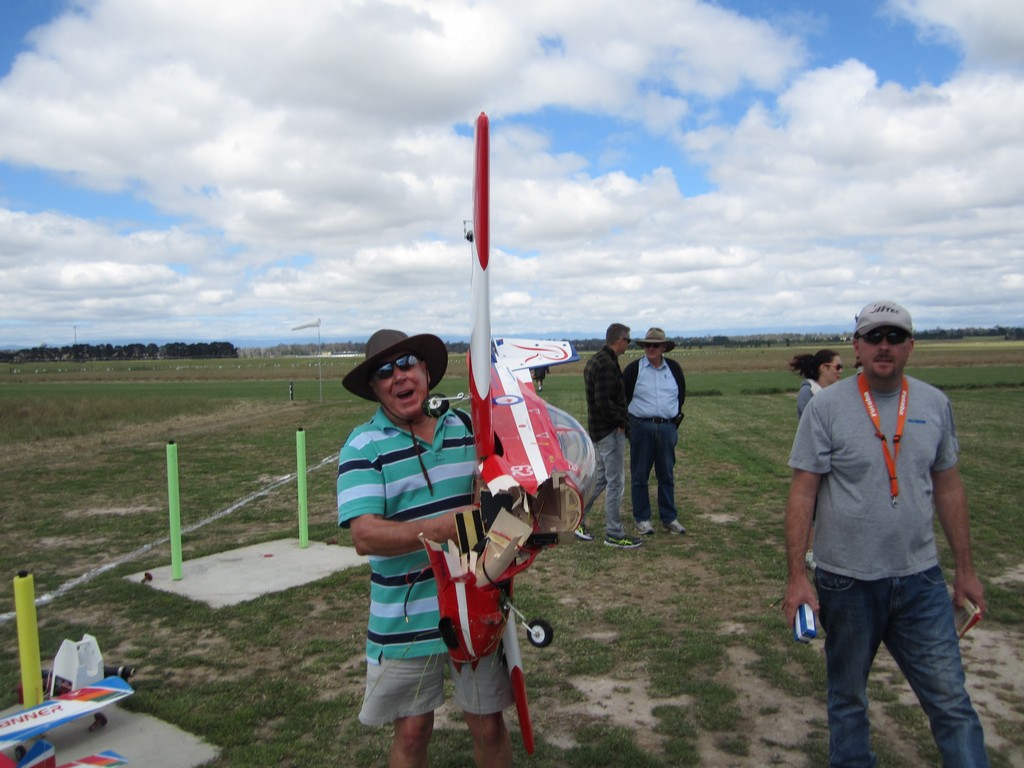 Doc Baldock flew a rather unusual looking model and an unfortunate landing mishap saw the model short of one half of the wing!

Kevin Hay brought out the big Pitts and put on an impressive display that pleased all the visitors, especially when the smoke was turned on! 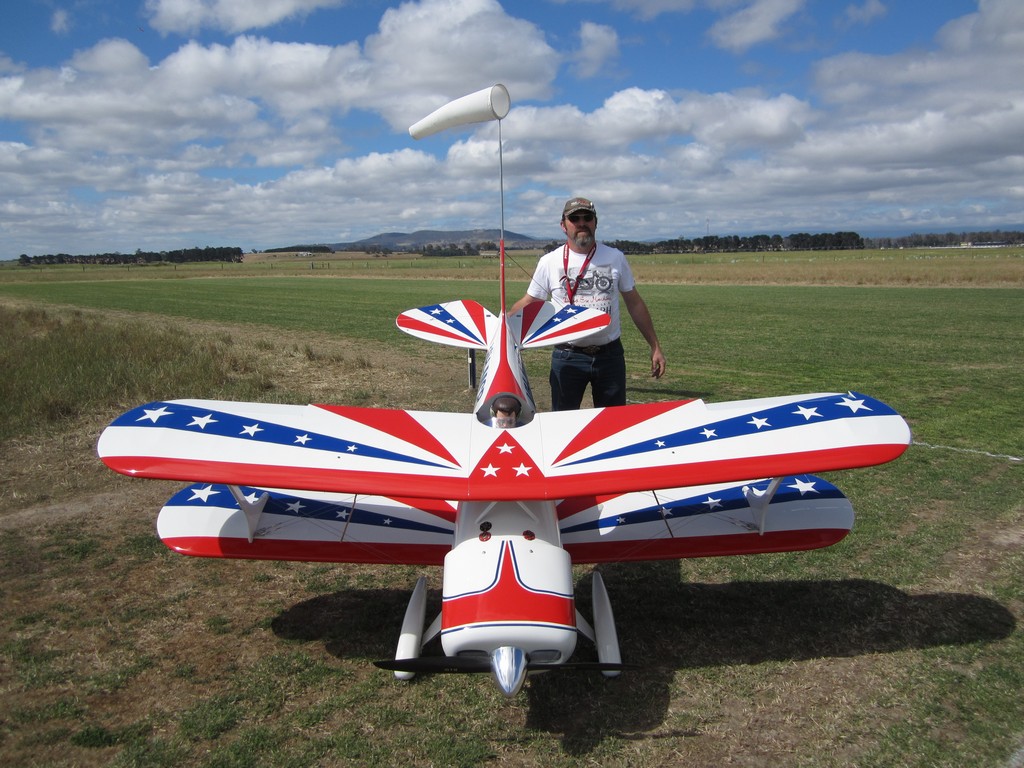 Some more pictures from the day. (Thanks to Will Deal for supplying the photos as I was busy on the cash register!)

Until next time…. Put a spark in your life and fly electric!