Club Day, September, 1 2012 and the first day of Spring! As hoped it was a brilliant day to welcome in the new season. Ground conditions were still a bit soft under foot but certainly things are starting to dry out. Very little breeze to speak of so a variety of models were flown.

The model is a “Maxi Melody” built from a RCM&E free plan first published in March 2011. The model was designed by Peter Miller. The original plan was for a 45″ wingspan but I blew it up to 175% giving it a wingspan of 97″. I built it to that size to keep in under the Heavy Model requirement. What motor is in it Chris? “It has a Super Tigre 2300 with a 17 x 8 prop. I’ve also used a few recycled parts from some old models, the Ugly Stick and a plug-in tailplane section from the Spot-On 120. The wingspan worked well for the sheeting as it uses a full length sheet from wing root to the start of the wing tips. Fuselage sides used a full sheet plus about 150mm.” Chris is a master at building foam core wings but in this case they are all built up wings. “The wings are built up and I cut out the wing rib patterns from the plan and glued them onto cardboard and then cut four of every rib. Lots of templates were used from the plans – for inter-plane struts, wing ribs, trailing edges, wing tips, tailplane, rudder and formers etc, all done the same way; cut the pattern from the plan and glued to cardboard before cutting them out.” ·How long to build from start to finish Chris? “About 3½ weeks”. It takes me that long to read the plan! “Mind you I’ve been working on it about 6 or 7 hours a day, every day of the week seeing I’m stuck at home”··Chris said. Other materials used? “Covering material – I used 7m of blue covering and just over 4m of the checkerboard for the underside of the wings. All Hobbyking covering thankfully kept the price down. At about $8 a 5m roll compared to $27 for 1.5m locally. Most of the other hardware, tailwheel, horns, pilot etc were also from Hobbyking. The cabane was made up of stainless steel wire as were the inter aileron connections. I also got on the grinder and belt sander to form an airfoil shape on these. The undercarriage was recycled from the Ugly Stick.” At least you were able to recover something from the crashes Chris! “As a last minute thing yesterday, I made up the little mudguards and added another 110gms to it. Still getting me under the Heavy Model weight limit.” Thanks Chris. 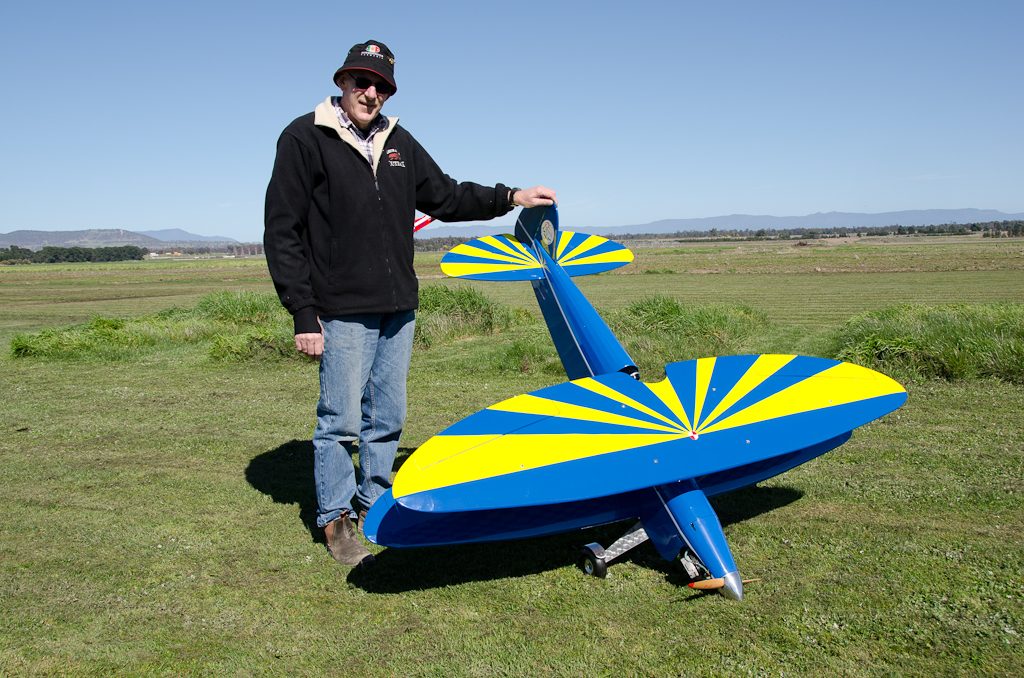 Chris and his scratch built “Maxi Melody”. (click to enlarge)

Another one to bring along a scratch built model (although on a much smaller scale was Jason George. Jason had built a “Paddy’s Pig” ·Originally powered by a Norvel .061 which was, to quote Owen C “a p…k of a thing” it was re-powered with an OS 0.10 which made all the difference. This was obvious as Jason was really trying to fly the wings off it! Eventually he succeeded as the model came to grief when Jason experienced loss of control and in she went. Jason set off on “the long walk”. A bit of damage but quite repairable says Jason. Further inspection revealed the rudder servo only operated in one direction. Some fairly agreesive flying over-streched those little 9gm servos or was it stripped due to the crash?

Terry Pearson was so impressed with the “Scanner” that he received from Fred Willis (but sadly was taken when the ground moved up to meet it one day), that he bought a new one! This time Terry did a bit of work on the motor. “Good fun to fly and only $105 for the model. I·increased the timing a couple of degrees and put a decent muffler on it – a Nelson pipe from my early pylon days”. It certainly has a fair turn of speed Terry.

It certainly was a biplane day with the Camerons bringing Merv’s Drifter and Owen’s Hot Drop. Doug C had his smaller PC-9 and the Canadair twin as well as a his Samurai glider. I saw Greg R with a glider and also flying Doug’s PC-9 but I’m not sure what else he had. Dave Jacobs brought along his “Tomboy” model and also his “Excel” glider. Dave lost sight of his glider when he had trouble focussing. He then realized he had sprayed ether onto his glasses!! Fortunately a number of spotters scanned the skies and found his model. Terry P did the honours and brought it home safely. No trouble with fuel fogging your vision with electrics. (Sorry Owen, I had to throw that in). Fred brought along his trusty “Dragon Lady”.

Bill Hellinga continues his quest towards Bronze Wing. Chris (his instructor) states, Bill would have had his wings by now had it not been for the long interruption due to Chris’s illness (You’ve done a stellar job under difficult circumstances with your health Chris!). The winter weather doesn’t help either but Bill is making good progress and it shouldn’t take long now. Bill has a hangar full of aircraft just waiting to take to the air. Take your time Bill and get plenty of hours with the Sky Raider first. 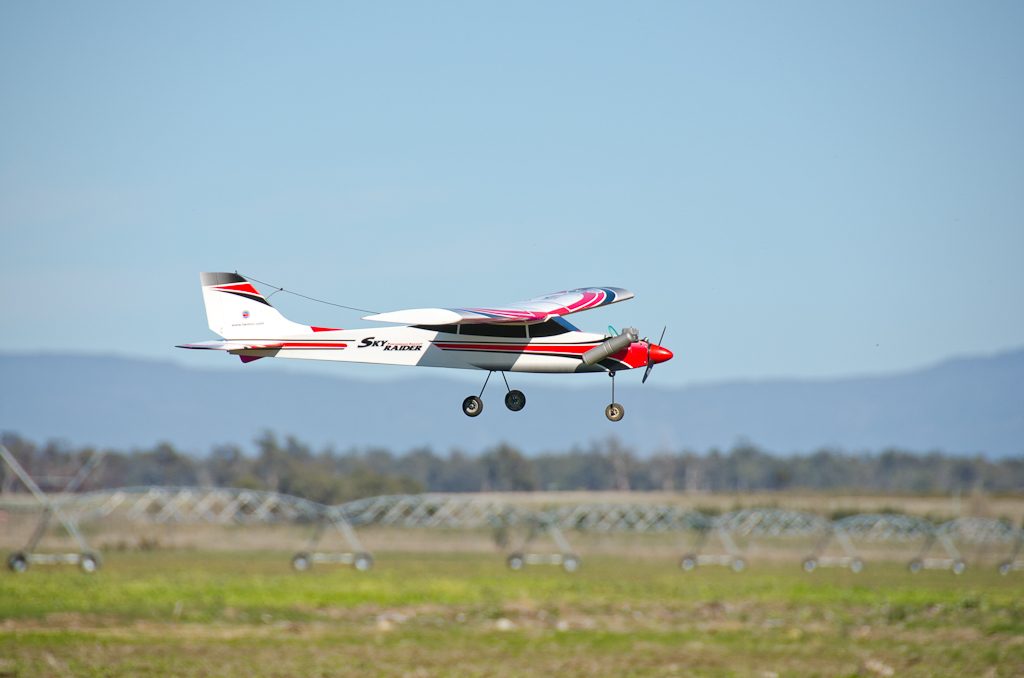 Attendance was average for the day but Kerry had prepared enough food for the troops. In addition to the usual barbecue fare, Kerry prepared some pikelets, complete with jam and cream on demand. They were quickly devoured. Fred also brought along a couple of packets of jam topped biscuits so any diets went out the window for the day.

I was able to negotiate the pits albeit with some difficulty due to the soft ground. I was armed with my camera and some more shots can be found here.

Next Club Day, October 6. A gentle reminder also to make contact with HMAC if you intend to go to their Aerobatics Fun Fly Event on Saturday, September 15. Flyer is here

Unfortunately the day ended on a very sad note with the news our dear friend and fellow member Peter Riall had lost his battle with long term illness. His close friends Richard Cooper and Max Wiggins informed me of Peters’ situation. Max sent me an email on Saturday morning and I called Max on the way to the field. Max advised Peter was gravely ill and on Sunday Richard called me to tell me of Peter’s passing. I’ve already sent a note to members advising of his passing.

It is with great sadness that I pass on the news that our fellow modeller and good friend Peter Riall passed away last night. Peter epitomised the true gentleman, always polite and taking the time to look out for his fellow modellers. I received many a call “just to see how you’re going”.
Many of you would be aware that Peter has been battling illness for a number of years and sadly it took its toll. Peter joined our club in early 2008. In July 2008 his grandson Mathew joined the club as a Junior. Peter suffered from ill health but still made the effort to attend the club when health permitted. He particularly tried to get to Club Days as he enjoyed the camaraderie and making a contribution to the canteen. Despite Peter’s failing health and the restriction it placed on his opportunity to fly, he continued his membership of the club and only recently rejoined as a Social member but wanted to add the $25 levy “to do his bit towards the club relocation”. A real clubman at heart.
We will miss Peter and can only hope he is at peace from the pain he has suffered over recent times. Peter would have been 82 in November. To his wife Gillian and family, our deepest condolences.
It will be a private funeral and at the families request, no flowers or donations. The family would welcome any cards or letters from friends of Peter.  R.I.P. Peter
Post Views: 799