Kevin Swiggs has submitted a very interesting article that emphasisies LMAC’s contribution to aeromodelling in the State. Not only are we one of the oldest clubs in Tasmania (if not, the oldest) having been established shortly after the war in 1945 but we still have a founding member in Dave Jacobs still building and flying which is remarkable. If anyone else has any stories to tell, then as Kevin has done, send them in to me and I’ll publish it. Thanks Kevin!

Here is the article written by Kevin Swiggs and published in the Australian Radio Controlled Modeller in March 1989. 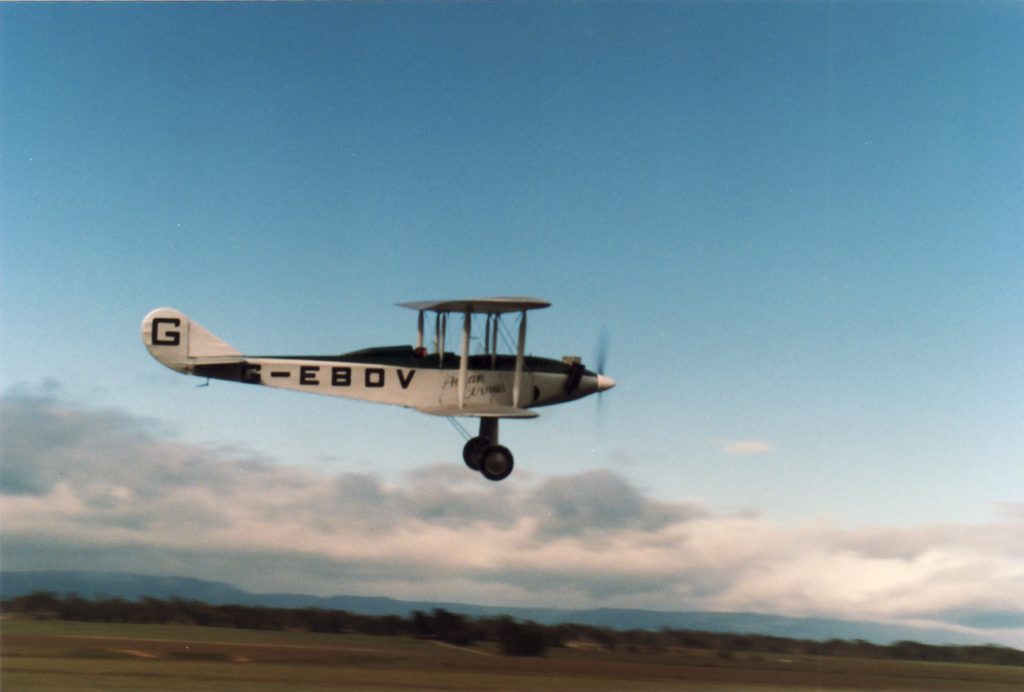 ln 1987 the Tasmanian Aero Club celebrated its Diamond Jubilee. Originally formed as the Tasmanian Section of the Australian Aero Club in 1927, the club located and developed an aerodrome at Western Junction, about 15 kms south of Launceston. This aerodrome was taken over by the Commonwealth and was a major EFTS during the war years, being further developed in peace time to a major airport serving Launceston and NorthTasmania. As part of the Diamond Jubilee celebrations a Reunion dinner was held, where former members from all over the nation were reunited to relive the past sixty years of the Club. My association with the club goes back to 1961 when l first commenced flying in Hobart with the AeroClub of Southern Tasmania and used to frequent the clubrooms in Launceston on nav. flights. Later as a flying instructor basedin Devonport a close relationship was maintained with the Club and its members. Now living in Launceston and flying with the state Regional Airline, I have a son who has graduated with the Aero Club as a commercial pilot and is also a committee member. During the dinner, club historian and long time oommittee member Lindsay Mi|ler asked me about the possibility of building a model of Ben Hinkler’s Avro Avian to celebrate the 60th anniversary of Hinkler’s visit to Tasmania, which was sponsored by the club in 1928.

A great deal of thought was given to the idea (approx 30 seconds) and together with Club president Brian Green (also a member of ERMAC Club) a decision was made to approach our club, Evandale Radio Controlled Aircraft Club, for a joint venture to build and fly the Avro Avian. I presented the proposal to a committee meeting of ERMAC, and was delighted at the response of fellow committee members to the project.

Researching the project we found that a 1/4 scale model had already been built in Bundaberg by John Farmer and that the plans where available. This of course saved considerable time in the early stages. Nominated Project Co-ordinator was myself with experienced builder and flyer Russell Walker as Building Co-ordinator and Max Wiggins as Flying Coordinator. Building started with Russell building the fuselage and bottom wings, Greg Robertson the lop wing and Tim Sydes the tail feathers. Wire work and wheels were built by Nick Saward and Max Wiggins. Slowly the model began to take shape with all the parts coming together in Russell’s workshop. Many hours of labour were put in by Russell to finish the model in time for the Royal Launceston Show in October. The aircraft was covered in Polytex and genuine silver dope was used to finish the model. The standard of finish achieved by Russell was excellent. 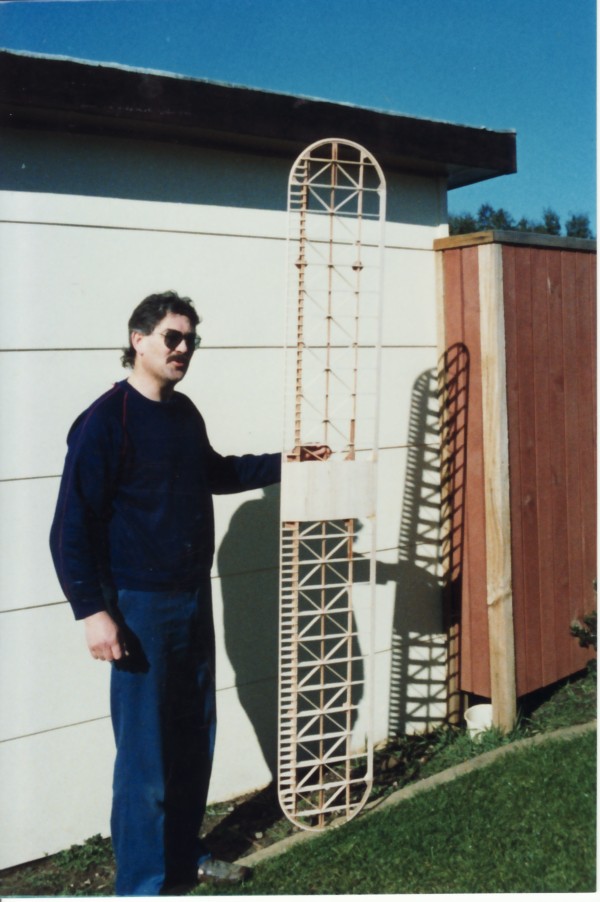 The full size Avro Avian had a 28ft wingspan, was powered by an 80 hp Cirrus engine. Its maximum take-off weight was 1360 lbs. Normal cruising was 85 mph. Avro Avian G-EBO V was purchased by Bert Hinkler on the 07/04/27 and was raced successfully at the Bournemouth Easter Meeting on April 15th to 18th that year, winning three races at an average speed of·90 mph. Hinkler left Croydon airport on February 7th 1928 and fifteen and a half days later landed BOV at Darwin at 1755 hours. Hinkler then toured Australia which included the flight to Launceston at the invitation of the newly formed Aero club. On Saturday May 5th 1928 Hinkler and his wife landed the Avro Avian on the Elphin Showgrounds, after a 4 hour flight from Melbourne, before a crowd of 10,000, who had paid the sum of one shilling (10 cents) per adult and sixpence ( 5 cents) per child to welcome this Australian hero. The Royal Launceston Show is held in October of each year and usually has good weather. The model was to be flown twice on each day of the show, Thursday, Friday and Saturday. Then the famous Mr. Murphy stepped in and rewarded us with strong winds for about a fortnight before the show right through until 5 p.m. on the Saturday afternoon, making it impossible to test fly the model prior to the show and totally impossible to fly at the show. We were looking at wind speed of around 20- 30 knots day after day. 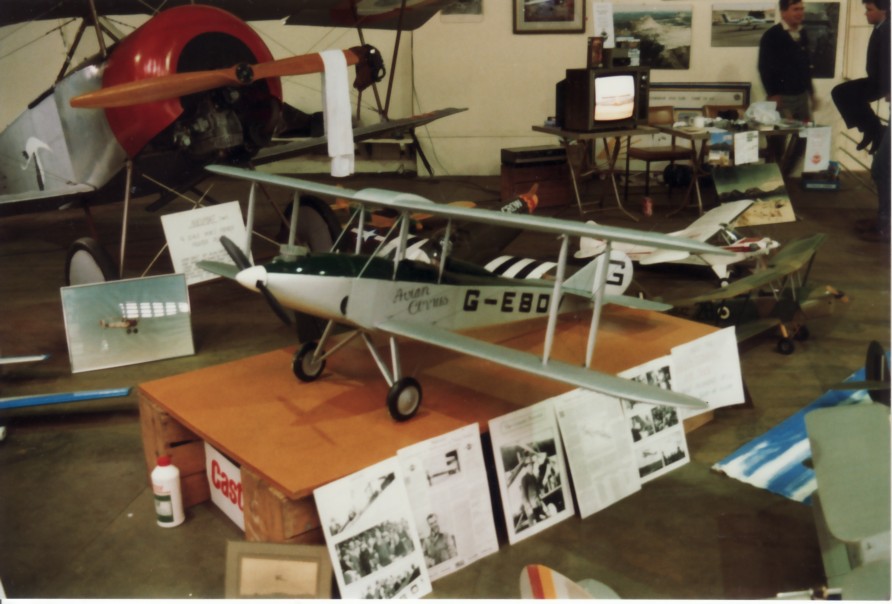 The centre of the display at the Royal Show

Although it did not fly,the model lead the Grand Parade each day on the back of a flat tray ute, as well as being the centre attraction of an aviation display in the Motor Pavilion. It was duly admired by the many thousands of people who attended the show. Due to work commitments and still very strange weather the Avian went on show in the Launceston Airport terminal until late November when both Russell and Max successfully test flew the aircraft on the 30th November. lt flew beautifully right from the first flight. No handling problems were encountered and the aircraft certainly looked the part. The model was displayed to Tasmanian Aero members at their December Flyaway. For once the weather behaved itself and we were able to fly the Avian twice as part of the days proceedings. Each flight was well received by both the members and general public. The AeroClub funded the model from proceeds of their Diamond JubiIee Raffle, and the power plant (Super Tiger 2500) was lent to us by fellow modeller Brian Hawkins, who also donated all the spruce required. The Avian has one more flight to undertake, which will be the actual landing at Elphin Showgrounds to commemorate Bert HinkIer’s arrival in 1928. After the completion of this flight the aircraft will be handed over to the Tasmanian Aero Club,who intend to put the aircraft on permanent display in the terminal building at Launceston Airport. A fitting reminder of a brave aviation pioneer. 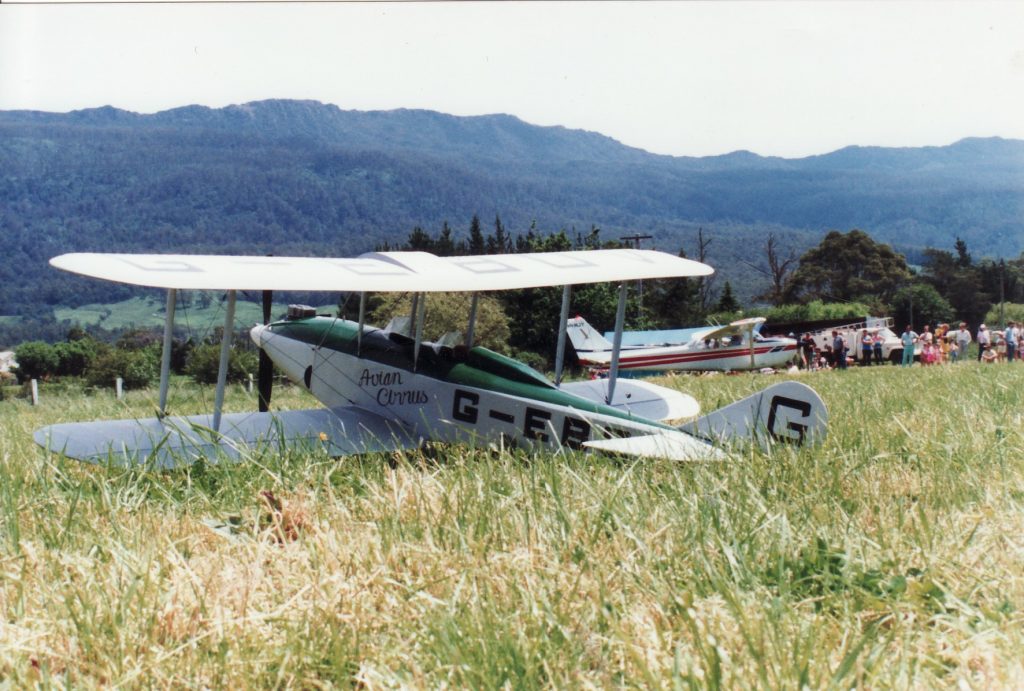 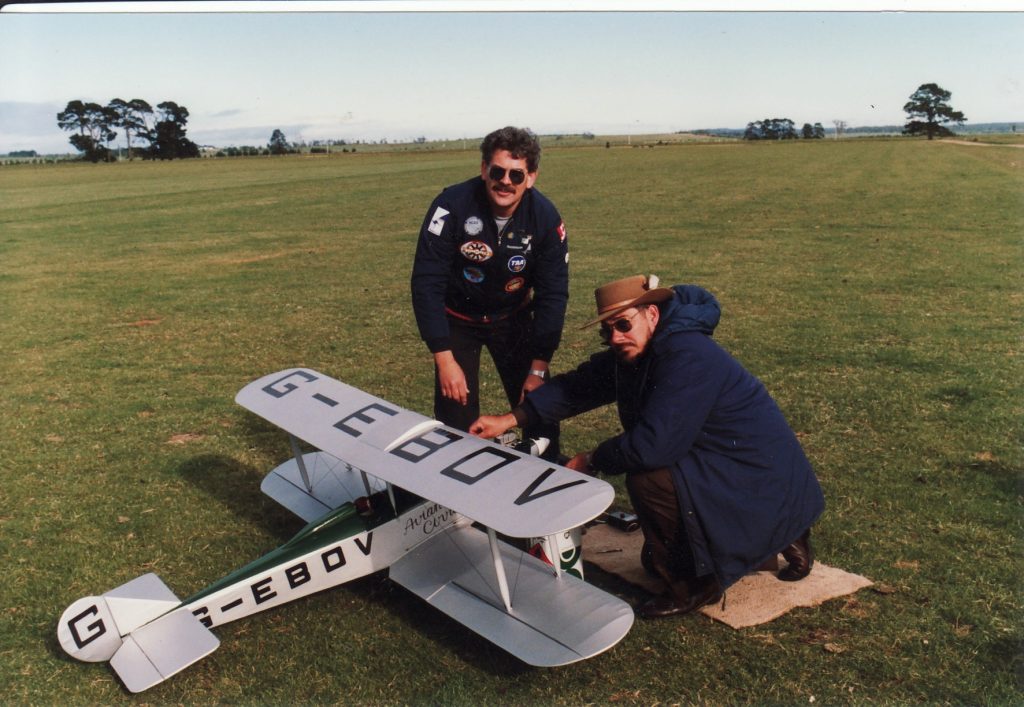