Myself and Jason being keen members that fly anything decided that if we were going to fly today the only way was the C/l way, so off we went to our local school oval. As usual the adrenalin was flowing many loops were smashed as my young son Damien exclaimed figure 8’s were loosely attempted and many trials of inverted flight were performed. Jason flew his Peacemaker like an expert until gravity again dragged the model into the ground on the rear stage of a wildly performed horizontal 8, no real damage but an engine was planted a good 6 inches in the ground. I flew my Talisman 27” span model designed for a 1.5cc with a newly fitted Enya 2.5, thought I would go combat. It flew well loops were large and fast and inverted flight was smooth. But at the end of the day the fin has to be re fitted to the model. I seem to have a problem with that of late. Different props were tried on the talisman to extract top performance of the model ready for a show next time we head south but alas Jason decided he wanted to know what RPM feels like instead of just listening. The model  took off for the time trial with Jason shaking his sore finger. He as a new modeler has now learnt not to place the finger in the rotating parts. But at least he waited until we had the engine screaming to the max. A great arvo was had and some more experience and lessons were learnt.

HOW WAS YOUR DAY IN THE CIRCLE JASON 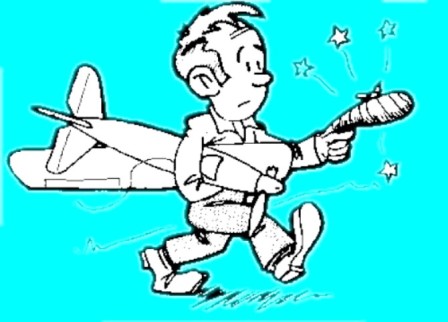